<Back to News
Brie Mathers on Body Image, Media Literacy, and the Power of the Heart 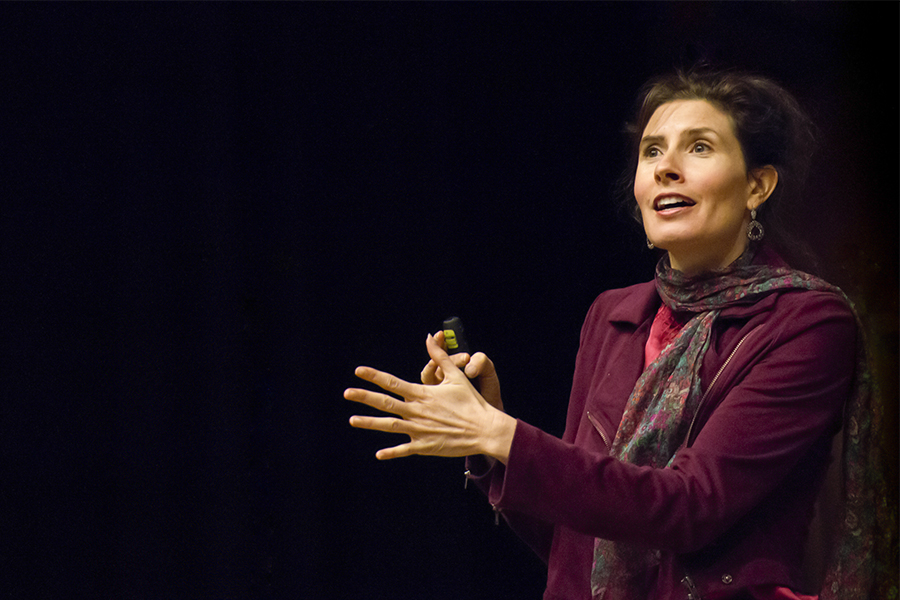 Activist and motivational speaker Brie Mathers, who has presented to more than 100,000 teens worldwide through her multimedia event Love the Skin You're In, spoke to TASIS students and faculty members about body image, mental health, media literacy, and mindfulness during an inspiring visit to campus that spanned November 20â23. The third Senior Humanities Program speaker this year, Ms. Mathers met separately with High School girls on the evening of November 20, addressed High School boys on the evening of November 21, presented to the faculty on the afternoon of November 22, and visited High School Physical Education and Health classes throughout the week.

Ms. Mathers, who battled mental health challenges when she was in high school and began her work as an activist when she was just 18, is now "on a mission to teach young women that the most important part of their body is their heart." Originally from Canada, she struggled with an eating disorder after winning the Ontario provincial gold in the 800-meter run in grade 10. She soon discovered that many of her friends were fighting a similar battle. "Little did I then realize how the hard times I went through could lead me somewhere really beautifulâwhere I am today being a light that reflects back to young women what they too can discover within them," she explains on her website. 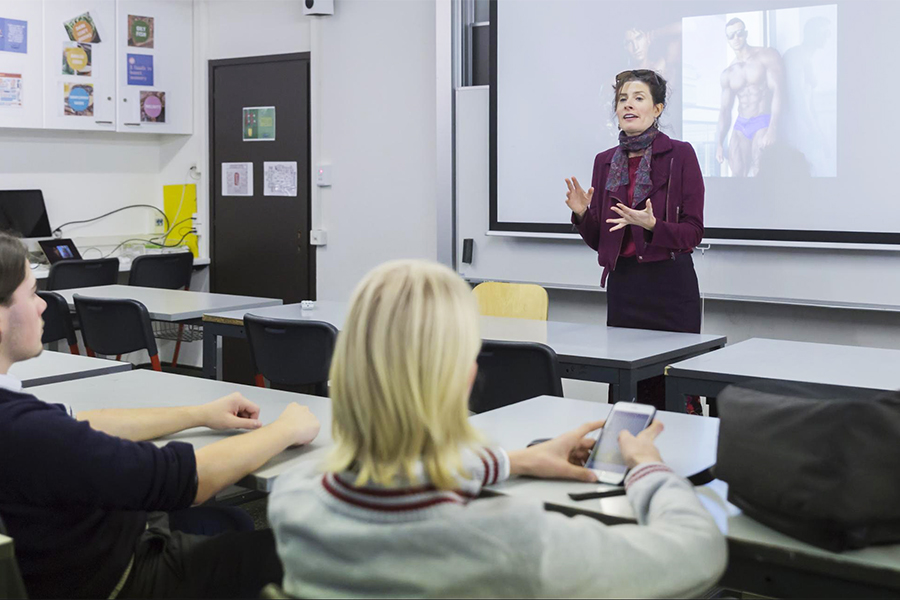 TASIS is the first school in Switzerland Ms. Mathers has visited, and while she was on campus she graciously made time for an interview with student writer Jessica Landa '18.

How often do you visit high schools, and what do you enjoy about those visits?
I go to 40â50 schools a year. My favorite part of the work I do is connecting with students and experiencing the opening that happens in the room. I think that opening happens in two places: in the mind and more deeply in the heart.

What are your general impressions of TASIS?
This place of learning is quite spectacular. I drew inspiration from your founder when I was preparing for my presentations. This vision of an institution was born of a woman who was so far ahead of her time. Funny and feminist, she lived wholeheartedly and upheld the same for students. And Lake Lugano is truly the most enchanting place I've ever been in my life. There is a fairytale-like quality to the school with all of its gorgeous architecture exquisitely set into the mountain.

Most of all, the diverse culture of TASIS is extraordinary. In particular, follow-up discussions with students were fascinating. It doesn't get more well-rounded than to have a conversation about hypersexualization in the media in a classroom with girls from New York City, Turkey, Moscow, and Brazil. That was really enriching for me. Cultures may vary but media also creates culture and Hollywood's brand of sexy is exported to the rest of the world.

If you could only give TASIS students one piece of advice to take with them forever, what would it be?
That would be to remember that the most important part of your body is your heart. I say that within the context of working with themes like body positivity and hypersexualization. The energy field of the heart is 60 times more powerful than the energy field of the brain. The heart is a very powerful organ. I think that when students make that their north star, or their guiding light, that it gives them a resiliency. I like to share that the heart can't breakâit's not china, it's a muscleâso whatever you're going through, you will make it through.

What do you think about what TASIS does with the Senior Humanities Program? Would you like to see it implemented in other schools?
I think the SHP provides an expansive model for opening students to the world in all of its elements. I am grateful for the invitation to participate in such a program. In our age of amped up social media, there is wisdom in placing well being within the heart of what schools do. It is so easy to forget the words of John Keats, "Truth is beauty, beauty truth." It takes a deep dive to rediscover where truth and beauty lie. In our world today there is tremendous value in learning to read images just as there is value in learning to read.

Why do you believe it's important to divide girls and boys when delivering your presentations?
This is a great question and an important question. I have learned through experimentation that the themes I touch upon are sensitive and intimate, especially for young women. In a co-ed context, what I notice is that the girls often shut down. Sometimes the boys act out. Because gender roles are already so embedded by the time you hit high school, everyone is carrying their armor. What I encounter when I do girl-only talks is that it's like the young women are backstage versus when you're in a co-ed context it's more like they're on stage. What I don't want to do is compromise the emotionally safe context that I am working to generate. Research also supports the idea that young women learn better amongst themselves.

I've spoken at many independent schools around the world, and different schools have different requirements that align with their values. After co-ed talks, young women have said, "Sorry we didn't participate, but the boys call us Femi-Nazis when we do." I think that's tragic, and I think it's really importantâespecially with these themesâto give young women a platform for their voices. We all need to value young women for their voices and imaginations rather than limiting them to the pursuit of being eye-candy, which is the subjugating message promulgated by popular media idealizations. 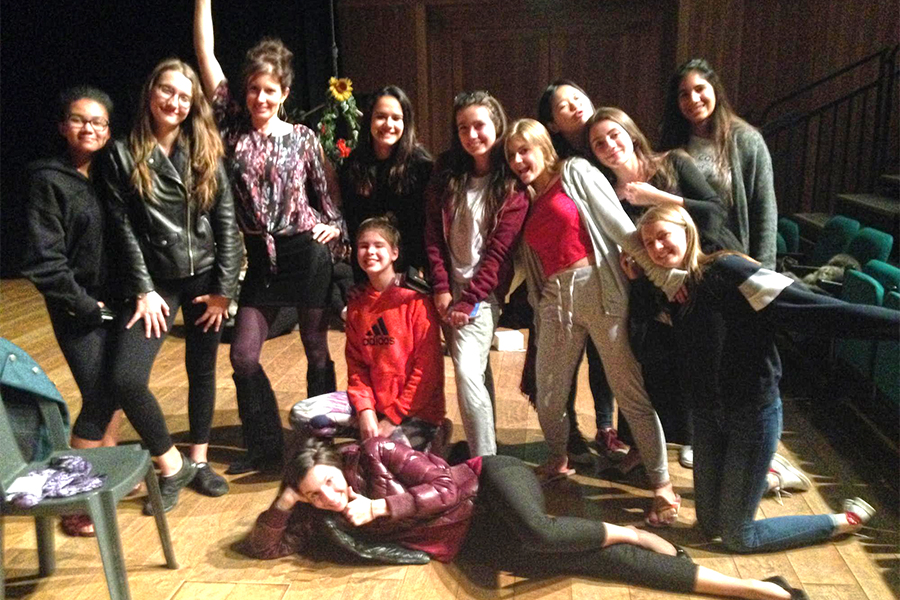 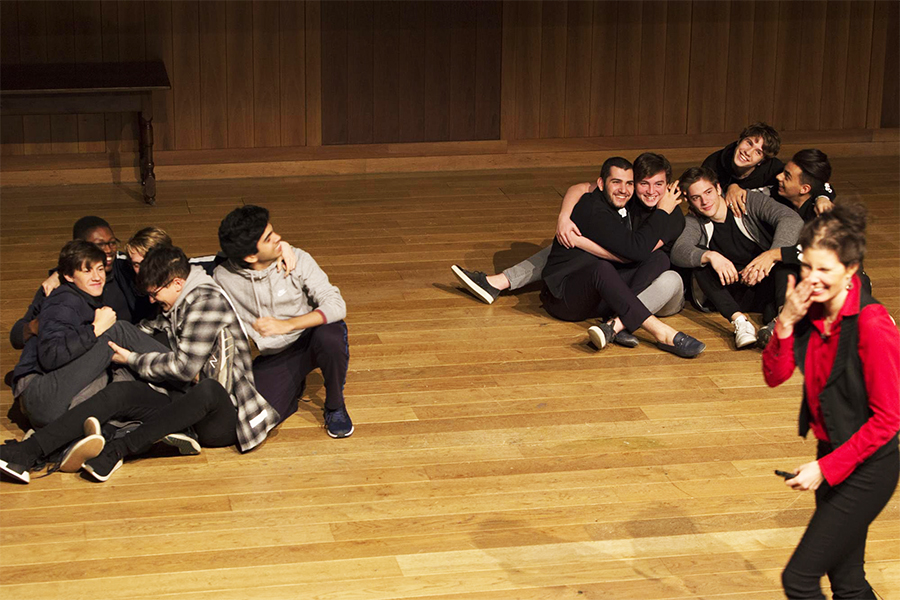 What do you believe is the greater issue to tackleâthe self-assurance in females or the imposed masculinity on males? Which one is more vital than the other?
I would like to say that these two things are equal. When I started this work, I offered girl-only assemblies everywhere I went. The boys' presentation is a new development that has really only come into being in the last two or three years. It's vital and I'm extra inspired by the boys' talk because of what I'm encountering in the rooms. What I'm seeing is that young men want to be freed from a hypermasculine culture as much as young women want to be freed from a hypersexualizing culture.

When you invite everyone to reach for their freedom you have a saner, more balanced population. Traditionally, men are the ones holding positions of power, so when you open them up to their empathic humanity and encourage them to really flesh out their emotional spectrum and allow themselves to want connection and belonging, you generate a re-emergence of a partnership/collaborative model that works for everyone.

It's equally important for young women to recognize that they can do anything when they rise above the propaganda of the media, and that when they fulfill their potential, cultures thrive. The conversation about beauty is really a conversation about power. We need to overcome this as a collective. I believe that speaking up in solidarity and sisterhood lights our way forth. I also deeply, fundamentally believe in the power of womenâespecially when we come together.

Why is it important to focus on a younger audience rather than teaching the industries that influence that audience (or rather the source)?
It is important to teach the industries, but as corporations have become predatory, corporate responsibility has become an oxymoron. Through education, we nurture change through enlightened future leaders. Worldwide we are witnessing the rise of this domination system. I like to reference the work of Doctor Riane Eisler, who wrote the groundbreaking book The Chalice and the Blade 30 years ago. It's been published in 27 different languages around the world. She researched ancient history to understand how the rise of toxic leaders like Hitler can happen. What she found is that thousands of years ago in cultures like Minoan Crete, goddess-worshipping cultures thrived. Those cultures expressed a partnership model. They weren't matriarchal, which is not by the way the opposite of patriarchy; they were based in a partnership/collaborative system, which is the opposite of patriarchy. The principles of partnership include shared leadership, mutuality, interdependence, and mutual respect. The world was a more equitable and sustainable place for the people living in those cultures. Herein lies the future of our planet.

What do you realistically hope to see in 10 years? What changes can you visualize occurring?
When I began doing these talks, body image was the struggle. With the current prevalence of dehumanizing imagery and pornography, young women now believe that their lovability is inextricably linked to their sexual availability and this, unfortunately, misinforms a lot of young people about intimacy and connection. The internet has grown up at the same time as the escalation in teen mental illness. Mental health statistics such as up to 23% of grade nine girls contemplating suicide (Girl Scouts 2017 State of Girls Report) are of grave concern and have arisen within an international thicket of curated social media lives.

That said, I wouldn't feel so inspired to get out of bed in the morning if I didn't believe that women are reaching a critical mass. When women comprise 20â30% of an institution, change happens. We are witnessing that currently with the #metoo campaign responding to Harvey Weinstein's exploits. Famous women calling out those who have hurt them invigorates women around the world. This is how social change happens.

In the end, we can aspire to be perfect and admired or we can drop into the gift of being authentic, lovable, and loving and recognize our common, vulnerable, messy, exquisite humanity. As one young man at TASIS reflected in his testimonial, "This taught me that love can change everything." Looking toward the future, I'll go with that.