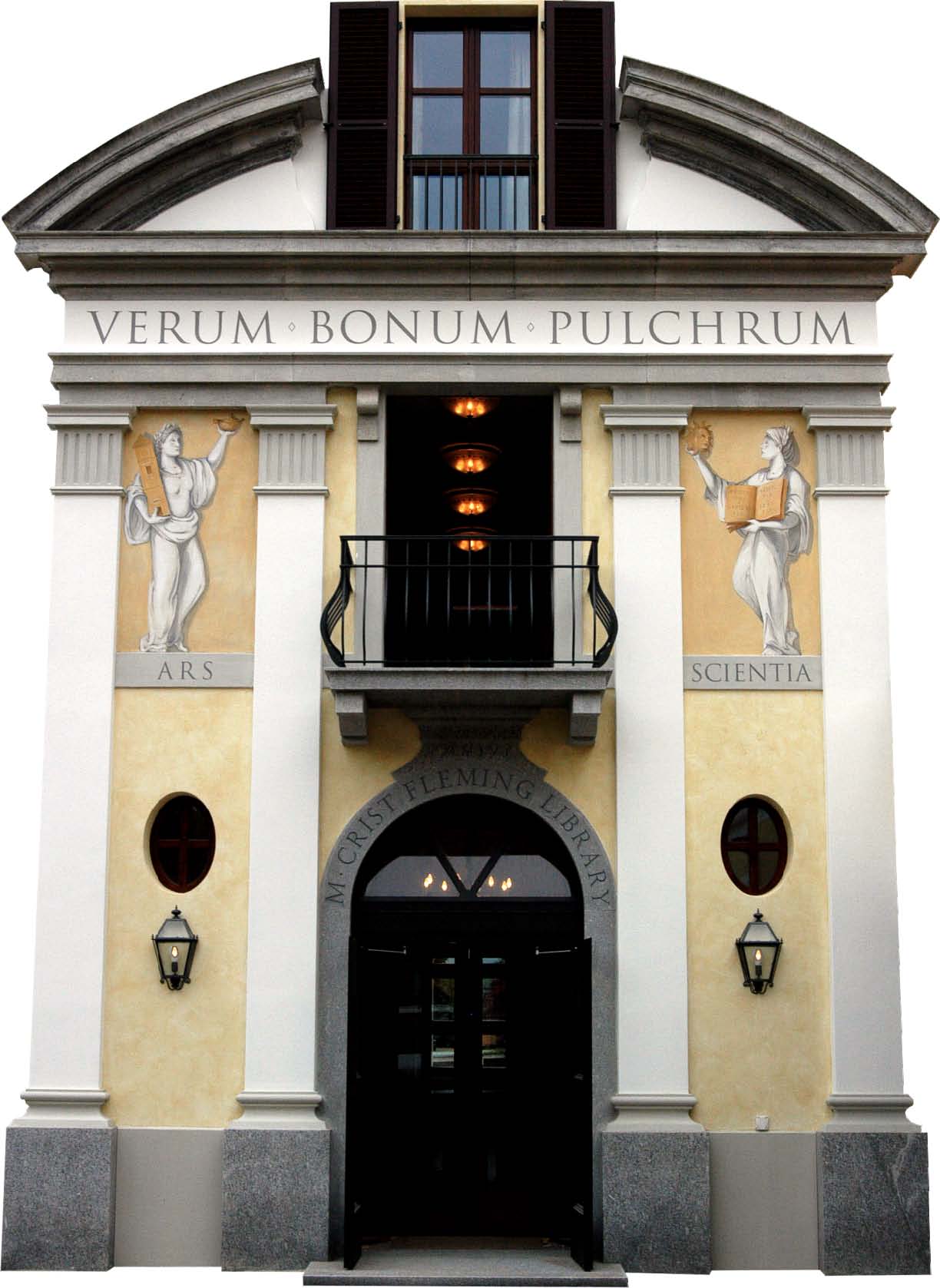 Libraries symbolize and communicate values. The façade of the M. Crist Fleming Library contains three words that have inspired Western educators since the time of Plato: Truth, Goodness, and Beauty. Plato saw these as “fundamental” or “transcendental” values by which anything can be exhaustively judged. To some degree everything can be judged as true or false, good or evil, beautiful or ugly. Truth, Goodness, and Beauty also apply to specific dimensions of human existence — Truth to thought and logic, Goodness to action and morals, Beauty to enjoyment and aesthetics.

Truth, Goodness, and Beauty are supreme ideals. Beauty, the most accessible of the three, often opens up human awareness to the existence of the other two. The harmonious proportions of a building's architecture could prompt students to reflect on harmonies in music or mathematics, or even the qualities possessed by a good person who balances practical concerns with noble ideals. Plato believed that a diligent mind would eventually attain a vision in which these three values and their complex relationship would transparently unfold. The Good would reign supreme, for “although knowledge and Truth are beautiful things, the Good is other, and more beautiful even than they” (Republic 509a).

Consistent with the vision of its Founder, M. Crist Fleming, TASIS is committed to transmitting the heritage of Western civilization and world cultures: the creations, achievements, traditions, and ideals from the past that offer purpose in the present and hope for the future.

From the TASIS Mission Statement

Mrs. Fleming's Contribution to Education and to the TASIS Foundation 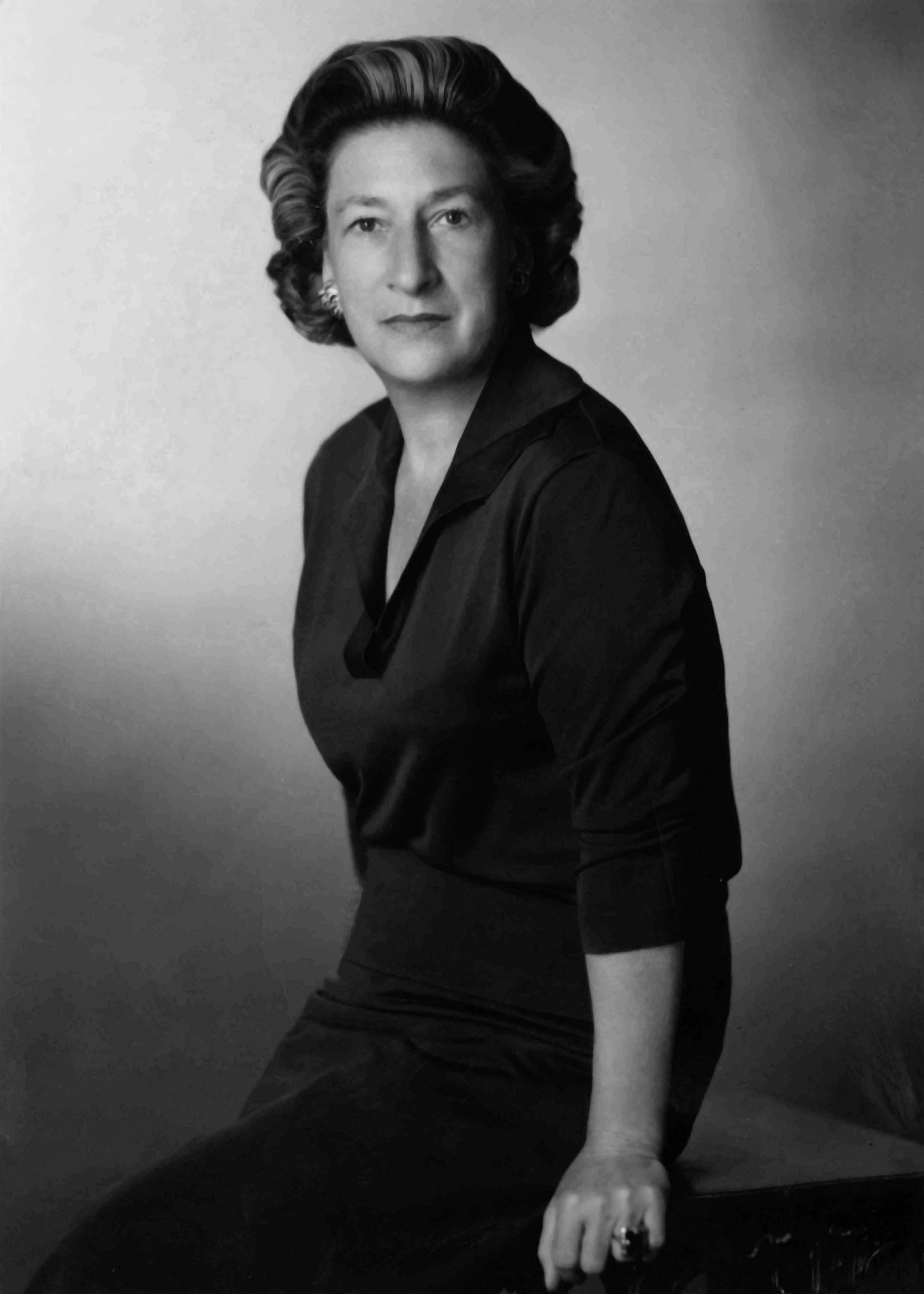 Mrs. Mary Crist Fleming (1910-2009), herself the daughter of school founders in the USA, grew up in the midst of her parents’ school in Swarthmore, Pennsylvania. She went on to found schools and summer programs in several European countries, including TASIS, The American School in Switzerland (1956), and TASIS England, The American School in England (1976). After studying in her parents’ school and in Europe and graduating from Radcliffe College, Harvard University, in 1933, she was intimately involved with education for the better part of a century. With a particular orientation to the French-speaking and Italian-speaking parts of Europe, she was an American with a cosmopolitan consciousness and a humanitarian vision drawing on classical and Christian sources, but with an unusual, unique personal charisma, enthusiasm, and generosity that touched the lives of thousands of people, including but not restricted to students and teachers of many nationalities and languages. Her services to education were recognized by the Department of Education of the U.S. Government, by President George H.W. Bush, and by Harvard University, as well as by institutions and organizations in Europe.

Toward the end of Mrs. Fleming’s life, she and her family decided to bequeath the TASIS Schools, which she started and owned, to a non-profit Swiss foundation, the TASIS Foundation, that would be charged with keeping alive her independent-school vision and educational approach for generations to come. Though her personal charisma is now only a memory, the stamp of her ideas and her vision is evident in both the exceptional beauty of the TASIS settings and campuses and the exceptionally positive scholastic and social ethos of the Schools and programs she founded. With her collaboration, the members of the Board of the TASIS Foundation crafted a statement of identity and purpose, the TASIS Paideia, to keep her unusually virtuous and inspirational educational vision alive. It is a vision simultaneously American and cosmopolitan based on a unifying and transcendent vision of human civilization.

The change in ownership of the TASIS Schools, now 100% owned by the TASIS Foundation, did not change the corporate structure of the operating Schools. The governance changes implemented in 2005 were put in place to further ensure the perpetuation of both Schools, which was the objective of the Founder, Mrs. M. Crist Fleming, and her family in donating the Schools and campuses to the TASIS Foundation. In reaching the decision on such non-profit status, the Board of the TASIS Foundation gave careful consideration to the TASIS history of entrepreneurial and managerial flexibility and independence provided by the existing corporate structure, a critical element in the sixty-year TASIS history of growth and success.

In addition, Board members recognized their duty to preserve and promote the Founder’s values and objectives in establishing the Schools and creating the Foundation. They were thus unwilling to subject either School to regulatory bodies and to regulations that could be governed by political considerations that could impose State directives in matters that have historically been the purview of the traditional independent school.

The TASIS Foundation Board’s mission is to aid, assist, foster, and promote the education of American and foreign students in the United States and in Europe by providing equipment, books, supplies, and funds for educational activities, faculty development, and facility improvements. The Board established at the outset that, as a strategic objective, it would not allow any TASIS School to become dependent on fund-raising to support operating budgets. While common in most American independent schools, using an “Annual Fund” to bridge the gap between tuition revenue and operating expenses can create pressures that TASIS chooses to avoid.

It is confirmation of the strength of TASIS that throughout its history it has produced positive operating results. These operating surpluses together with prudent mortgage financing have funded the development of the TASIS Schools for the past sixty years. It is the Board’s judgment that these forms of funding will continue to be the primary sources for funding high-quality programs and campus improvements, together with fundraising where and as possible. We are very grateful to our alumni and TASIS families for their generous support in funding our beautiful M. Crist Fleming Library, the John E. Palmer Cultural Center, the Ferit Şahenk Fine Arts Center, and the Campo Science Center. We are optimistic that similar generosity will provide the funds necessary to continue to build the TASIS Global Village.