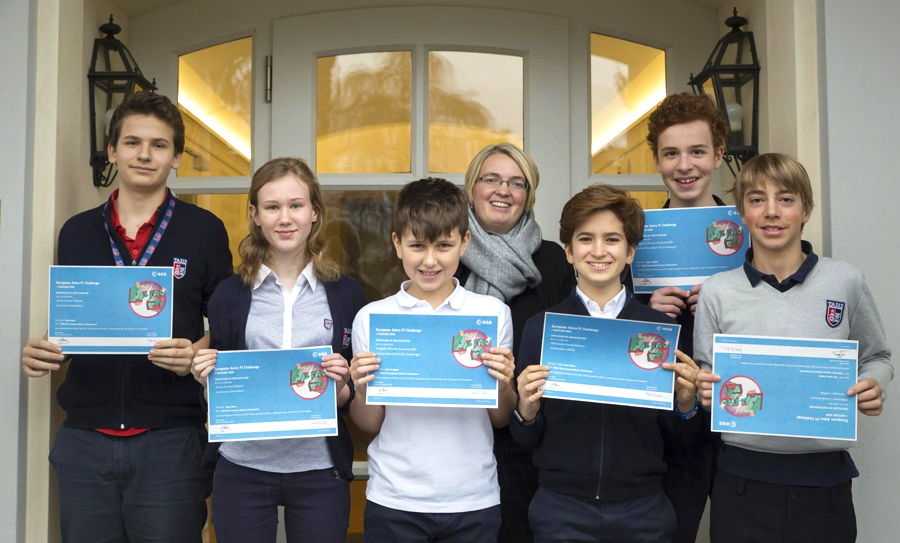 These students take a Computer Science elective course in the Middle School taught by Ms. Amy Bloodworth. This November, the class began working on the challenge entitled “Mission Zero.”

“Mission Zero is a collaboration between the European Space Agency and the Raspberry Pi Foundation,” explained Ms. Bloodworth, who has also helped make coding and robotics a key component of the Middle School Science curriculum and was the recipient of the Khan-Page Master Teacher Award in 2016. “There are two Astro Pi computers on the ISS, Ed and Izzy. An Astro Pi is a small computer enclosed in a flight case with many different sensors, including an accelerometer, a gyroscope, a magnetometer, a pressure sensor, a humidity sensor, and a temperature sensor. One of the Pis, Izzy, also has a camera attached to it that points out of the window in one of the modules that looks down on Earth.”

“My students participated in Mission Zero, as they were just starting,” continued Ms. Bloodworth. “They were asked to write a short piece of code for submission. The code, written by students in the Python programming language, measured and displayed the ambient air temperature on the ISS and also displayed a short greeting to the crew on the Astro Pi’s 64 RGB LED matrix.”

After being uploaded to the website, the codes are rigorously checked (because obviously you can’t just send any code to the ISS). Ms. Bloodworth’s students wrote the code in November 2017, and soon after Christmas they found out their code had achieved “flight status.” After being queued, it eventually ran on February 1, 2018. 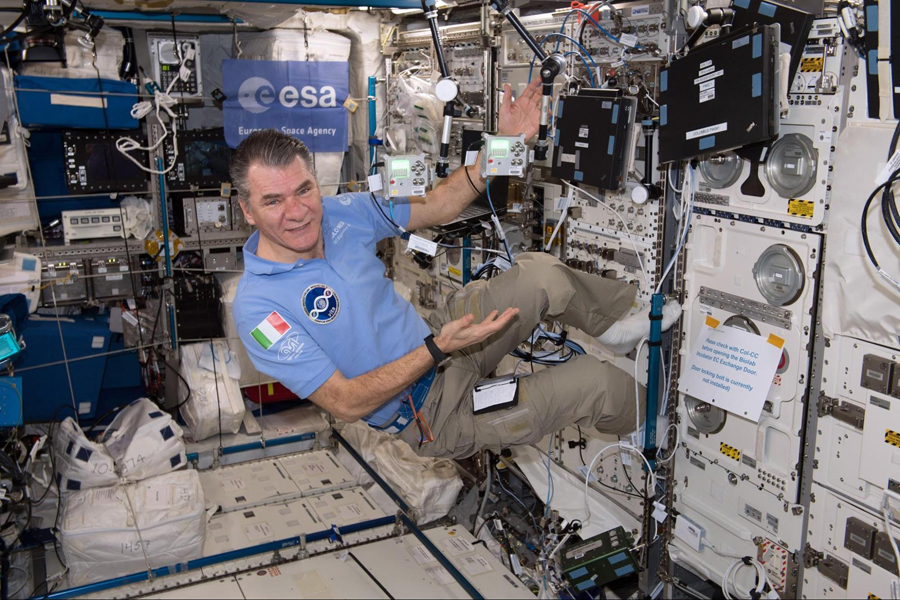 Paolo Nespoli, the scientist on the ISS who signed the students’ certificates (photo credit: ESA website)

“Mission Zero was a beginner's project,” said Ms. Bloodworth. “Next year, the students are hoping to take part in Mission Space Lab. They will be able to choose from two possibilities: Life in Space, where they can make use of all the sensors on Astro Pi Vis (known as Ed) but cannot record images or videos, or Life on Earth, where they can use all of Izzy’s sensors and its infrared camera.”

Students must also propose a particular project. “Maybe they want to use Izzy to take a picture of the Earth every time the space station passes a particular point,” said Ms. Bloodworth. “They can then piece those together to see the changing ice caps or investigate vegetation on earth—really anything they can come up with.”

“If they’re using Ed, they will most likely be doing a more physics-related experiment,” continued Ms. Bloodworth. “Every now and again, the space station has to boost itself back into the correct orbit, and the students can measure the acceleration from the accelerometer, for example.” 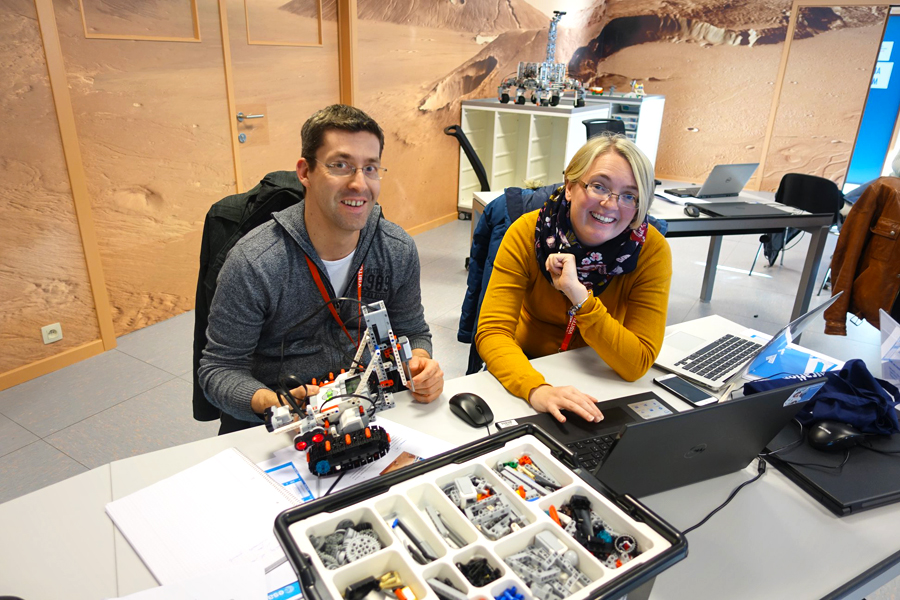 Ms. Bloodworth took a course with the Raspberry Pi Foundation two years ago, where she learned to use the Raspberry Pi computer and Sense Hat. Recently, she has done some work with ESA. She was in the Belgian Headquarters for four days in February to attend a robotics course and learn about the ExoMars rover mission led by ESA's Mars Exploration Program, which is planning to launch in 2020.

“They printed my certificate on an actual photo from Mars,” Ms. Bloodworth shared excitedly. “The space robotics lab was unbelievable, and being there was very inspiring.”

ESA invited 18 STEM educators from across Europe to the course. The agency is aiming to create resources for a new space curriculum that better reflects aspects of modern space science. “My students are so interested in space-related topics at the moment, having been inspired by SpaceX, Elon Musk, and the International Space Station,” said Ms. Bloodworth. “Progress in science and technology is increasingly rapid, and our challenge is to create a curriculum that prepares our students for the future. We are always trying to bridge the gap between science and science education.”

The Middle School Science Department, which is chaired by Dr. Brett Merritt, makes adjustments to its curriculum each year. At the moment the department is rewriting its space unit to reflect recent changes and advances in the field. The pioneering curricula will allow teachers to include topics such as growing plants in space. Students would be taught all the plant material they are learning right now, but it would be merged with concepts like gravity and hydroponics.

“Many parents will associate science with the traditional subjects of biology, physics, and chemistry,” said Ms. Bloodworth. “Whilst these remain central to our program, science now comes under the broader umbrella of STEM (Science, Technology, Engineering, and Mathematics). Teaching STEM allows our students to integrate technological advances and make connections between the sciences.”

Ms. Bloodworth is also eager to take what she learned during her time at the European Space Agency and weave it into her science and computer science lessons at TASIS. “I am currently developing a number of activities that will see the students building and coding their own rovers, collecting and analyzing samples in Mars simulations, and investigating the use of satellites,” she said.

While at ESA, Ms. Bloodworth also got to experience some astronaut training. “I think it’s fair to say that I don’t have the stomach for space travel,” she said. “Fortunately, a career in space science doesn’t necessarily mean going to space. There are numerous career opportunities in space science right here on our beautiful planet.”

Ms. Bloodworth looks forward to having her classes participate in future robotics and coding olympiads and contests, such as the First Lego League and the World Robot Olympiad. Now that her students have had a taste of success, she believes they are eager for more.

“I know they are only in seventh and eighth grade, but what these students have done is a big achievement,” she said. “This is something that will still look impressive on a college application in five years time. Not many kids have run code on the International Space Station at the age of 12. I’m impressed with them.”

From Book Week and Easter celebrations before our two-week spring holiday to sports contests and Academic Travel after, we take a photo-driven look at the past month at TASIS.

Read More about This Month at TASIS: April 2022
Powered by Finalsite