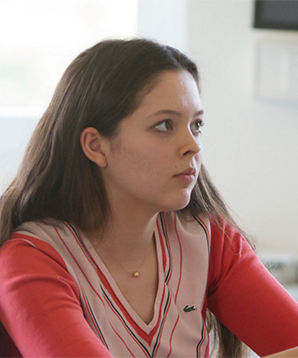 After also receiving offers from the University of Edinburgh and the University of Bristol, Firyuza Yunosova ’15 (Russia) opted to study Medicine at Hull York Medical School, which admits just 140 students each year.

Firyuza has a facility with language—she speaks Russian, English, Tatar, and some Italian—and excelled in the sciences at TASIS, posting the top score of 7 on both the higher-level Biology and higher-level Chemistry exams en route to an International Baccalaureate Diploma (39 total points) and the School’s Science Award her senior year. She also played Varsity Basketball, sang for the choir, and acted in musicals.

Firyuza believes her busy schedule and the intense academic regimen at TASIS prepared her well for HYMS, where she has already been elected President of the Society of Paediatrics. She was also selected to work with a professor and a Ph.D. candidate on a summer vocational research project entitled "Cancer tissue neutrophil proteases and role in thrombosis," and the understanding of mechanisms studied in their experiments could prove to be very useful for some cancer patients who are at risk of thrombosis.

Most inspired by “all those things that I thought I wouldn't be able to do—like studying hard subjects or going on the Nepal Service Learning trip,” Firyuza singled out a few TASIS teachers she leaned on when the going got tough.

“Dr. Price [science] always believed in me,” she said. “Her support coincided with not the easiest time for me, so it meant a lot to have a teacher behind me. Mr. Morris [music] influenced me as well because he showed me what it is to stand tall in a way, and that was very new to me.”