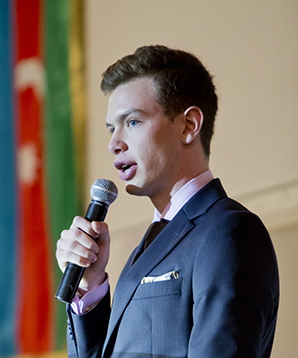 Fluent in English, French, and Italian, Ryan initially was considering schools in the UK, but after conversations with the college counselors he decided to focus his search on the US. “The College Counseling Office offered me advice and guidance on school choices while helping me see the differences between a British and American education,” he said.

Ryan graduated with an International Baccalaureate Diploma after seven impressive years at TASIS. He was a Head Dorm Proctor, served in Student Government, and played for the Varsity Basketball and Volleyball teams.

His significant impact on the School was highlighted at the 2014 Commencement Ceremony, where he was honored with two of the four most prestigious Graduation Awards: the H. Miller Crist Award and the Michael Ulku-Steiner Leadership Award.

Ryan credits TASIS for helping mold him into the successful and well-rounded student he is today.

“I learned how to interact with different nationalities and groups and be open-minded about differences in opinion,” he said. “TASIS taught me the value of a liberal arts education as well as practical skills like time management, and I was inspired by my close connection to the TASIS community as a whole and the backgrounds and stories of everyone there, from the students to the teachers.”

While Ryan misses many aspects of TASIS—“especially Academic Travel and Ski Week, the campus and surroundings, and the small size where everyone knew each other”—he has thrived at Tufts. He created the Tufts Daily Newspaper iOS/Android Application, has served as a Web Programming Teacher Assistant, has earned a spot on the Varsity Crew team, was selected to be a Compass Fellowship Mentor, and completed a Startup Internship in Boston over the summer.