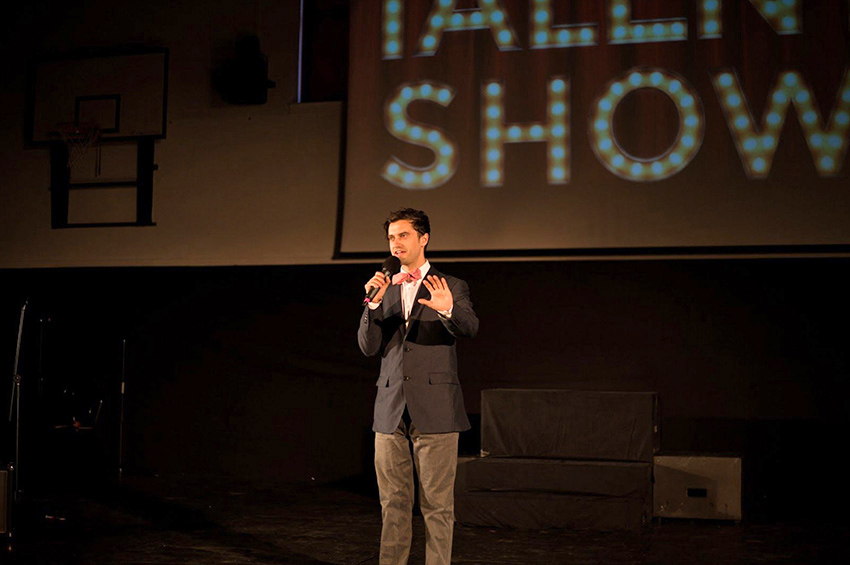 Michael Rosenbaum, the new Director of the TASIS Summer Programs’ Dedicated Performing Arts Team (DPAT), sat down with Amelia Panella ’18 to discuss his new role and share his vision for the future.

Can you please discuss what you do when you’re not in Switzerland for the summer?
I am a professional actor and composer throughout the year. I live in New York City, though sometimes my work leads me to Nashville, Tennessee. Since spending last summer at TASIS, I have worked on eight scores that I composed or co-composed, one of which was performed as the Elementary School Musical this spring. [This musical, Cry Wolf, was co-written by fellow DPAT members Stephanie Figer and TJ Liquori.] I worked as an actor in three professional productions both in Nashville and New York. I also counted 60 songs that I either wrote or co-wrote this year, so it was a busy year musically.

Music composition has become one of my newest loves, especially since starting at TASIS. I co-wrote my first score during my first summer here at DPAT in 2014. I also co-composed this year’s TSP musical along with fellow DPAT members Kyle Adkins and TJ Liquori.

What made you want to apply for the Director of DPAT position once you learned that Matthew Frazier-Smith would be stepping down?
I was offered the position by my predecessor, Matthew Frazier-Smith (Frazier), who did an amazing job leading this program the past four summers. He knew last summer would be his last as director, as he wants to devote more time to professional development. Prior to last summer, we began to discuss the possibility of me filling the role after he was done. After some thinking and self-reflection about whether I would be the right person for the job, I happily accepted the position as Director of DPAT. 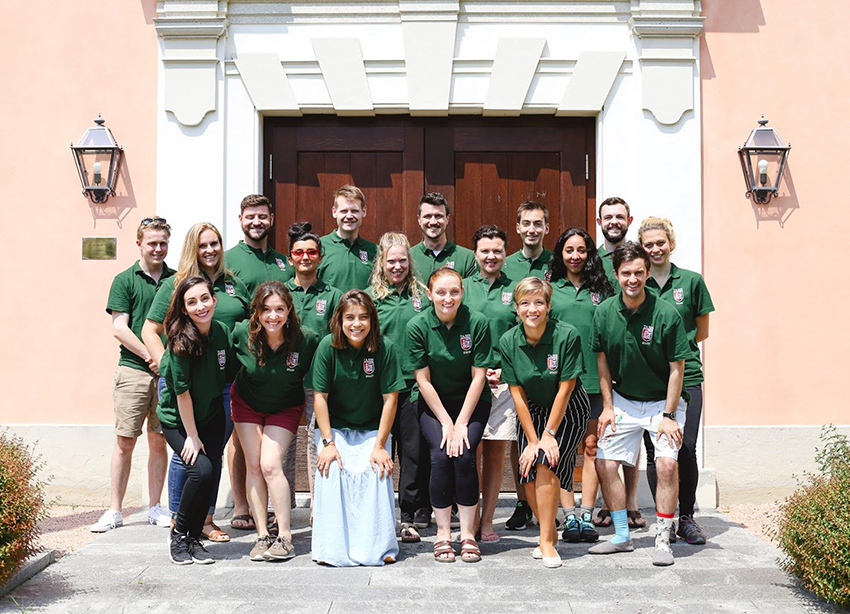 How did your predecessor prepare you for your new role?
It is a huge role, and I still wonder if I’m doing the right things all the time, though I think that is natural for the first time being the director of something like this. Frazier prepared me very well for the job. Once I had agreed to accept the position for the following summer, we met in Paris prior to last summer and discussed what it means to be a director and what our responsibilities are. Throughout last summer, I shadowed him in a lot of meetings with the other directors, including the Headmaster and the Business Office Manager, to start figuring out what exactly the Director of DPAT does—not just overseeing a staff of teaching artists and the curriculum for the performing arts but also managing the logistics of our performing arts spaces, our cultural events, and all the hosting opportunities we have throughout the summer. Since last summer Frazier has been in communication with me as much as I needed to answer any questions. He has been very supportive of this change, knowing that this is a newer program compared to the other programs that the TASIS Summer Programs offer, and he has perfected it as a director, in my opinion, though he has many suggestions for the future. There is always room for improvement!

Even perhaps without knowing it, my past four summers and the other roles I’ve had have led me to this level. While Frazier has done a very good job preparing me for this summer, I also think that during the past few summers I was being prepared for this role just by being here and consistently coming back as a veteran staff member. I don’t think I could have accepted this role after just one year at TASIS. Knowing the lay of the land—who to talk to, who to ask what questions—is very helpful in a job like this. It is important to know the other staff members and the other programs, to know the buildings, and to know what it takes to run this program.

Do you have any new initiatives planned for this summer?
This summer I tried not to rewrite the book too much as I wanted to see how everything runs, and I know Frazier has done a great job in setting it up. We do have a few new offerings this year: CDE Dance and CDE Drama. These were previously offered but not always run by DPAT, so we have taken that on. We are also offering a Set Design Club for MSP, and they will help build the set for the MSP musical, which is exciting.

But in general, for my first time around in this position I like to think about this quote from Picasso: “Learn the rules like a pro, so you can break them like an artist.” In order to change the rules or change the game, you need to know what the rules are. So maybe next year I’ll have some more opportunities. I do have some ideas.

How does DPAT help students improve their confidence and language skills? In order to properly acquire a new language, you need to apply it—and what better way to do that than through the performing arts? Theater, music, and even dance help the students apply the language they’re learning and provide us as educators with tangible examples of how they are doing with it. Through drama, through musicals, and through the other opportunities we have on campus, students have a chance to speak in public as opposed to just writing something down or speaking in a classroom.

I also think the study of dance, music, and theater builds confidence with students within their bodies, their voice, and their decision-making capabilities, and therefore I think the performing arts are not just an addition to other offerings we have but are essential to education in general. They are not only a way to improve public speaking skills or confidence in oneself—they also provide opportunities for teamwork and decision-making, and I think one of the most important things they teach is the lesson of empathy, being able to see what it feels like to be someone else. In a school that is surrounded by international students, coming from many different backgrounds and cultures, I think empathy is key in order to make everything work within the classroom, the lessons, the IB Program, the ability to write a well-versed essay, and, ultimately, the college admissions process and beyond into their adult lives. Arts education can be the most useful tool for that, especially for knowing where someone else is coming from— whether that’s your teacher, your classmate, a friend, or someone you disagree with. The performing arts help you put yourself in the shoes of someone else and see your life, or their life, from a different perspective. I think empathy is the key to a better world, and the performing arts—and theater in particular—help facilitate that. In the way I teach performing arts, theater is history, language, and design. It incorporates all the other classes and subjects. Music is math and science, and dance is sport and science. Theater binds together all the other elements of education into one while also providing entertainment for each other. 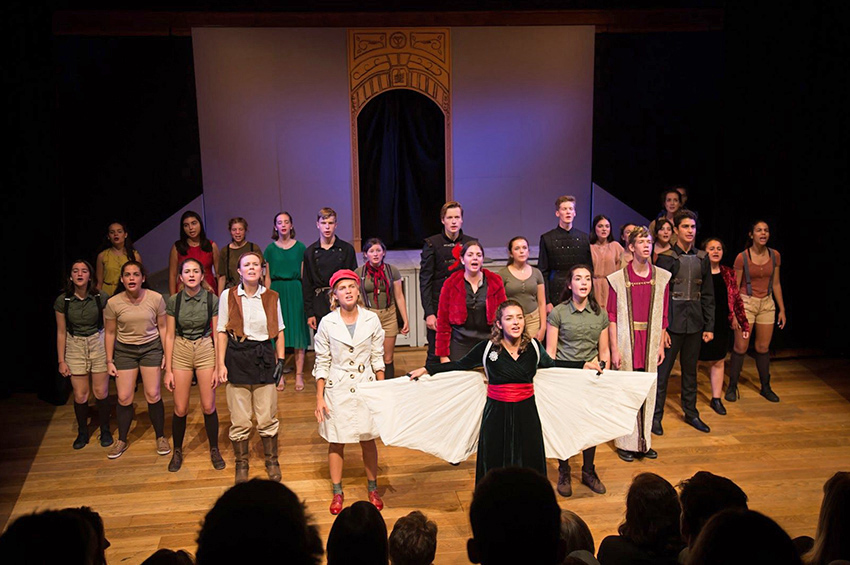 How do you envision the future of DPAT?
I certainly hope DPAT continues on and TASIS remains one of the most special places on Earth in terms of its support of the arts. In America right now arts education is dwindling at best. Fewer and fewer boards of education recognize the value of the performing arts, and they see their other classes suffer because of it. I think TASIS is a beautiful place for many reasons, but specifically because of its emphasis on the performing arts, and in the summer we get the opportunity to do so much of it and offer so many things.

I would like to continue to build on what we’ve started. There are more opportunities for design classes—for students who want to be involved with the performing arts but who aren’t performers and prefer to be behind the scenes. These classes could set some students on a path to lucrative careers in set design, costume design, or technical design. A previous student at TASIS who is now on our DPAT team, Benjamin Gordon, didn’t want to be a dancer or performer but wanted to learn about technical things, and through DPAT he was able to learn those skills because of our resources here. Now as a 20-year-old he owns his own business in Oxford, England, and will probably be running the whole market someday. He is just one of many success stories that can be traced back to the offerings we have here, and I think that we can continue to build upon that—especially with regard to crafts like stagecraft, set design, costume design, and technical design.

I certainly hope DPAT continues on and TASIS remains one of the most special places on Earth in terms of its support of the arts.There are also other performing arts besides dance, theater, and music that we could explore. A few years ago we had a film program that in my opinion was very successful, and I would like to bring that back as we continue to adjust to the modern digital age. We need to enable students and encourage them to use the technology they have correctly, effectively, and responsibly. I think we could do that through a film program here at TASIS. I’m looking forward to offering even more classes in the future and helping TASIS attract students from all over the world who might not want to come and learn a language but would love to learn from an intensive performing arts program in the summer. The fact that we have musical theater courses in MSP and TSP and maybe even in CDE in the coming years is what makes TASIS stand out among other schools.

I’m very excited to be the Director of DPAT this year, and I have wondered if it is something I would be good at or something I would enjoy. But after just a week and a half of being here this summer, I have found that I love this job and have discovered that all of the experiences I’ve been involved with for most of my life have helped prepare me for this role. I hope I can continue to grow this program and find room for improvement because there is always room for improvement, especially in the arts. Another thing that arts education teaches us is that although there is no such thing as perfection, we should always strive for it.

I’m very grateful for this position. I’m grateful for Frazier setting me up so well, and we have a great staff this summer to support the program. I’m excited to see what they can encourage our students to do. These students never cease to amaze me. They are capable of incredible things, and it is our opportunity to provide them with an opportunity for discovery.