Nuovo Fiore Ethiopia is a non-profit organization that aids and encourages the education of elementary school-aged and middle school-aged boys and girls in East Africa. Prior to traveling to Addis Ababa, Ethiopia, each spring, TASIS students in the Nuove Fiore Global Service Program group learn about the economic, political, and social inequalities prevalent in the country while actively fundraising to support Nuovo Fiore’s key initiatives.

During the first week of this year’s Spring Holiday in April, faculty leaders Holly Shepherd, Matthew James Friday, and Kat Walser, along with 12 TASIS students, made the journey to Ethiopia. In the poignant essay below, Mr. Friday explains how his first Global Service Program trip was defined by smiles, love, and important life lessons. 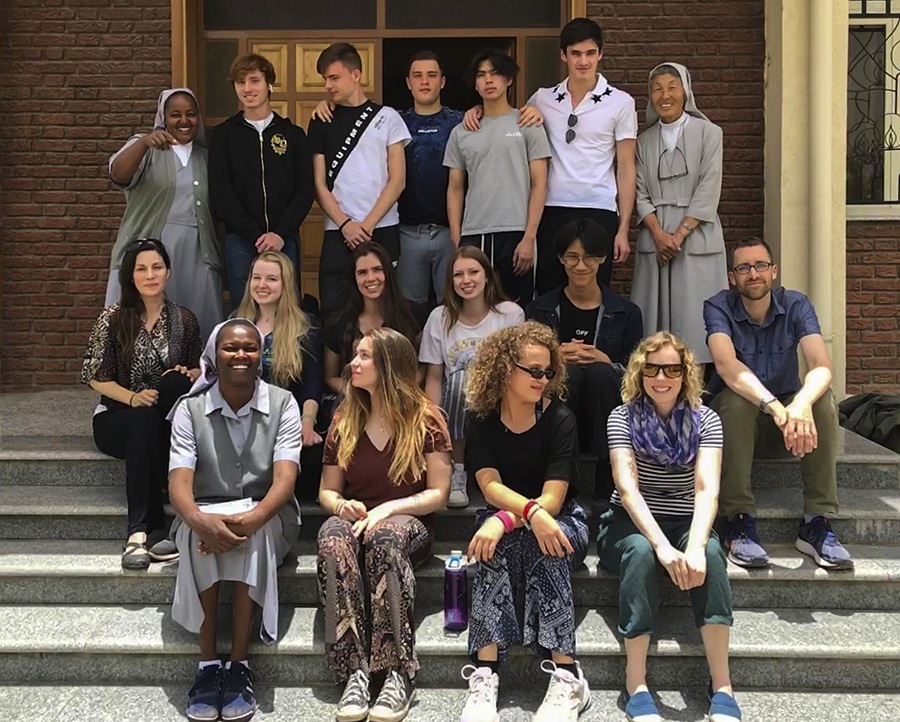 Smiles. So many smiles. That’s one of the many lasting memories that stays with me. Every day of our week-long experience at Auxilium School, every single child who saw us smiled at us. They all came up to us, offered their hand (or fist for a fist-pump with exploding firework movement), and asked our name, age, and if we were well. Their interest in us was well beyond the fact that we were visitors, a foreign novelty. Their interest was a genuine, ingrained, inherent love of other people. We were surrounded and overwhelmed with love.

When I signed up to be a chaperone on the Global Service Program (GSP) trip to Ethiopia, I knew it would be an intense and fascinating experience. We were taking a group of 12 TASIS High School students to visit and work in a school on the edge of the capital city, Addis Ababa. The School had been sending students for several years, with groups led brilliantly and passionately by TASIS EAL Teacher and College Counseling Assistant Holly Shepherd.

The Lugano-based charity Nuovo Fiore has also been a big supporter of the Ethiopian school, helping to fund the building of the new high school with support from TASIS families, including two students from grade five (see their reflections below). One student from my current fifth-grade class had visited the school in October 2018 and inspired me to consider this opportunity.

Clearly, of all the remarkable GSP trips, this one has reached deeply into many TASIS hearts. Would it also affect mine? I went hoping it would.

Every day followed a similar pattern: early breakfast at 7:15 for 30 minutes; tidy up and then head outside to greet the local students as they came to school. For 30 incredible minutes, we were bombarded by curiosity, questions, and endless games of rock, paper, scissors. Assembly was at 8:15, so we watched as hundreds of children greeted the day with announcements, songs, and the National Anthem. Then it was into classrooms, to observe at first, and then teach or assist in lessons. Every time you entered a classroom, the class would greet you in unison, often with songs. Every time you left, you would be thanked and often told that you were loved. At morning playtime, the local children constantly requested that our students come to their class. Impossible to reject the request but challenging to honor so many.

Lunch was at midday—a wonderfully appetizing feast that we all dived into. The afternoon meant more classroom observations and lessons. School finished at 15:20, and we spent up to two hours outside, mingling with students, playing music, dancing, playing football, forming friendships. The children would slowly drift away, slowly because they just wanted to play with our TASIS students rather than go home to shanty houses, sparse meals, broken families. Then we had a little down-time before dinner, another excellent meal prepared by the caring nuns. At 20:00, after cleaning up, we had daily reflection meetings, followed by lesson planning, preparation, and early nights. This was true service learning!

Throughout the week we were in for many surprises, mostly good but some shocking: up to 60 children crammed into classrooms on hard bench rows; children with ragged holes in their school uniform or broken shoes; occasional corporal punishment (which the school Director has banned); scenes of donkeys and goats wandering around outside, one huge building site; bursts of sudden hard rain showers followed by the burning sun; so many young faces carved into hard lines by poverty and unimaginable hardship. Water had to be constantly filtered, hands frequently sanitized, suntan lotion constantly applied. Such a different world to ours in Lugano.

One of our favourite experiences was being in the kindergarten. If you ever feel despondent about the future of humanity, visit this kindergarten. Two hundred enthusiastic three-to-five-year-olds will throw themselves at you, indifferent to your age, gender, or ethnicity. They just love you, without question or hesitation. Taught by a group of excellent teachers, this part of the school is filled with laughter, songs, and a love of learning—the best examples of humanity. Doing storytelling with these children was a highlight of my career. On the last morning, the children sang for us a beautiful song, and the chorus perfectly summed up the whole experience. 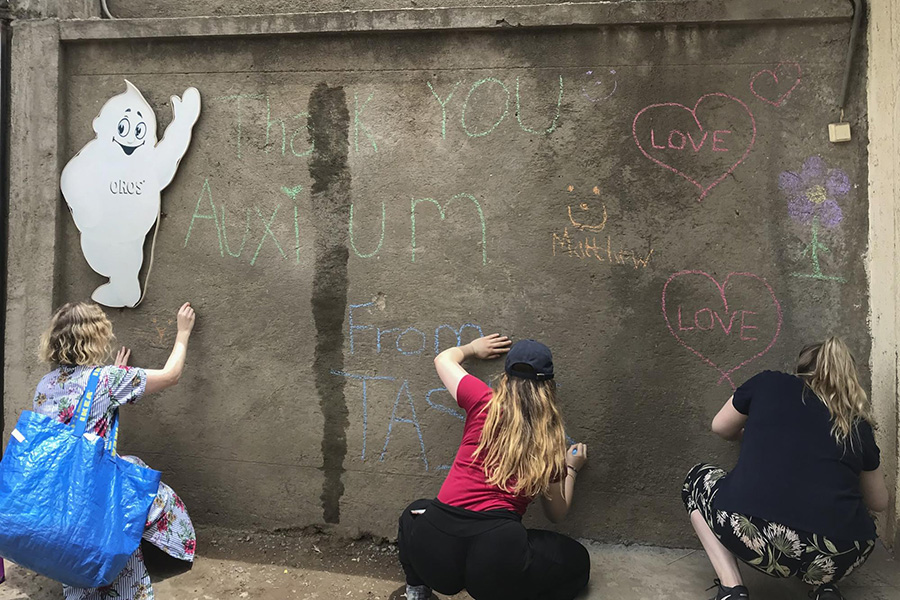 Witnessing how the school and its students affected our TASIS high schoolers was a real privilege. The goal is that this trip is a service to the wider world, but also a service that is revelatory and transformative. Our students took on the task of creating and delivering lessons across the school to huge classes, and they did this with an impressive level of dedication. They were treated like celebrities by the local community—everyone wanted their signatures.

I can’t imagine myself, aged 17 and 18, being as brave and hard-working, in the pulsing heat, 6000 feet above sea level. By the end of the week, it was clear that hearts had been affected on both sides. The tears flowed and commitments made to returning. The three nuns who took such great care of us said our group had been the best they ever hosted! I certainly felt very proud to be a part of this TASIS group.

Towards the end of the week, I was talking to some grade-seven girls about their school. I observed that it was the friendliest school I had ever visited. I wondered why. One girl told me, “It is simple. Ethiopians love people.”

This had been proven every day, all day long. Who would not want to return to such an environment?

Ethiopia, we love you.

Two current fifth-grade students, Jaya Bruera from Mr. Friday's class and Riccardo Capacci from Ms. Kim Goldsworthy's class, have made their own trips to the Auxilium School in Ethiopia in the past. Below are their reflections. 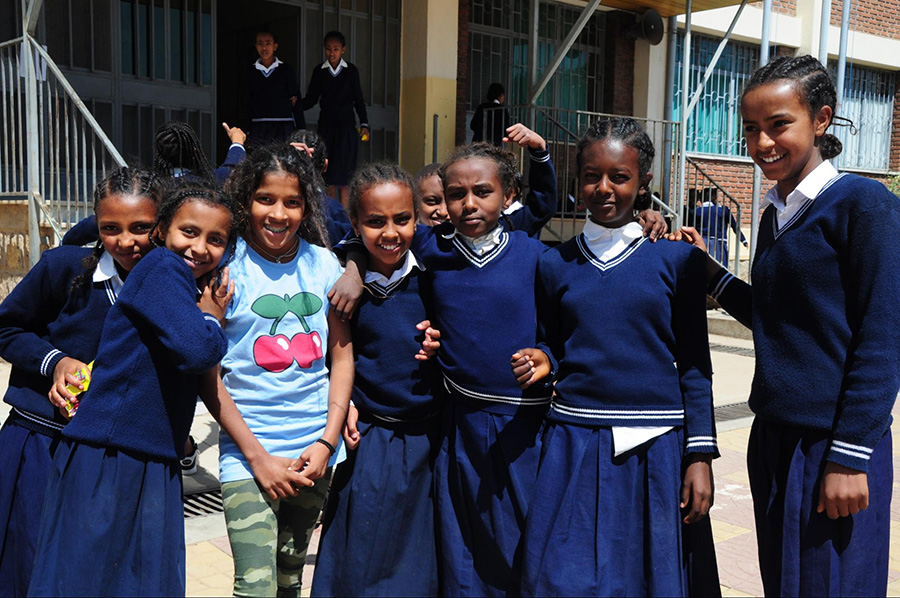 In 2018, I went to Ethiopia with my family to see an amazing school called Auxilium. In Auxilium there are wonderful kids with big hearts who are kind, respect others, care about others, and, especially, never give up until they reach the end of the path. The best thing about the school is seeing the children being happy with what they have. They never complain.

In other places such as Switzerland, many people just care about fancy stuff like cars, clothes, etc. I don’t even think they realize that a lot of poor families don’t have enough money to take care of themselves.

When I first arrived in the school, I was freaking out because it was my first time seeing lots of kids. My heart was beating as fast as a jaguar, but when I got to know the kids better I felt more calm. One day a girl called Elroy came up to me and asked if she could show me her classroom, and when I went inside I already felt like a student.

Without the Nuovo Fiore foundation in Africa, there wouldn’t be a primary school, middle school, or even high school for 800 students. My family and I raised money to donate to the school.

When I was leaving to go to the airport, I said goodbye to all the children. When I was on the bus, a tear almost fell from my eyes, but I tried to keep it in. We should all give everyone in the world a chance to go to school so that they can learn more every year, and their brains will grow and grow.

I have been to Ethiopia four times, and it’s surprising that people there are happy with what they’ve got, and I can tell you they’ve not got a lot. Here in Switzerland, people always talk about things like money, fashion, luxury, cars, and other things that poor people don’t even know about, and they don’t realize that in places like Ethiopia people wander around town begging for money.

It made me feel better when I learned about the Nuovo Fiore foundation because they build schools for African students. In Bole, near Addis Ababa, they built a primary school, a middle school, and a high school for 800 kids, raising money from donors such as my family.

It was so mind-blowing going there. It hit my heart and should hit yours too because it’s important that everyone has an education so that they have a chance in their life.