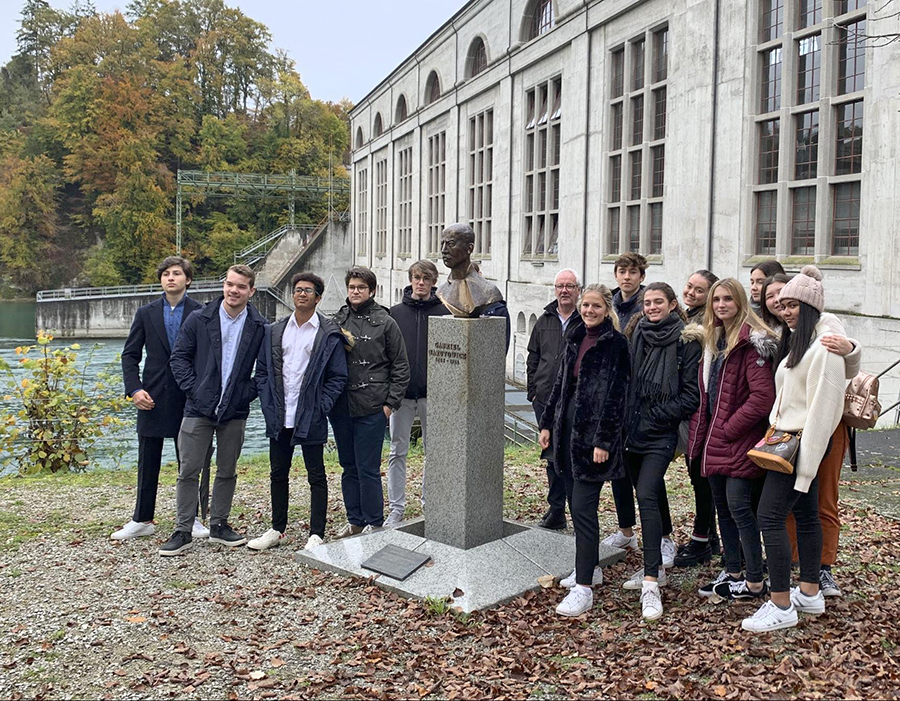 In today’s day and age, the talk of climate change and the fear of what’s to come is ubiquitous, especially among younger generations. While many people prefer to ignore the problem and live ignorantly in bliss, attention is necessarily brought to today’s young generations concerning the problems they have to face. For five days in late October, a group of 14 students and three teachers traveled from Ticino to two very different cantons of Switzerland—Bern and Geneva—to immerse themselves in the omnipresent connections life has to physics, the problems surrounding the world’s climate today, and the possible solutions that are necessary to take to solve these problems.

On our first full day in Bern, our Academic Travel group departed for the Mϋhleberg Hydroelectric Plant, the start of our tour of many different plants throughout the week. Though the plant was immense, through the different control rooms and caves we explored, one thing truly resonated with me: the idea that as I was standing at the top of the plant’s dam, I was standing on a seemingly hidden and insignificant plant, but at the same time it was powering countless large regions of Switzerland. Nearly 60 percent of Switzerland is powered by renewable energy sources, with hydroelectric sources accounting for 95 percent of all renewable energy. 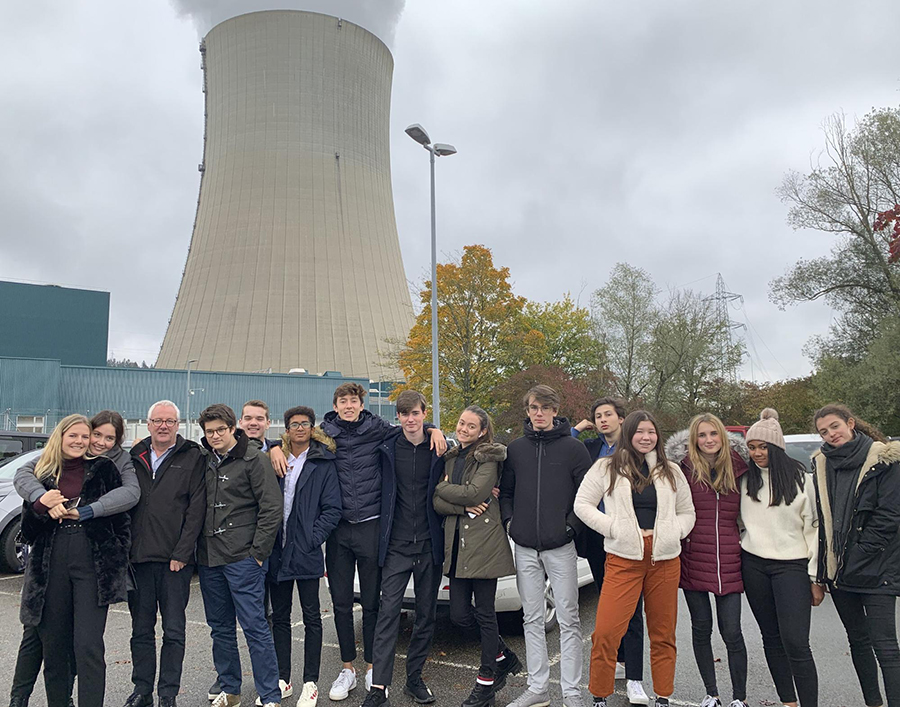 The next day, the time to take the highly anticipated tour of the Kernkraftwerk Gösgen nuclear power plant arrived. Here the tour was very centered around climate change and how it is our generation’s job to try to fix the damage left behind by past generations. Though we have been educated on this important topic at school, many of the students and teachers alike learned a lot of new data and information about this dire situation. The somber mood of the conversation was very enlightening because it brought to light that people around the entire world are attempting to solve this crisis, but they also need us to realize the consequences the Earth is facing. This experience definitely left an imprint on my interest in global warming and climate change and what is necessary to stop it from becoming irreversible. The second part of the tour was spent exploring the actual nuclear power plant, and this almost felt like a spy film. For one, the plant required our official identification to even enter, and we had to go through airport-like security. It definitely felt as exclusive as we had heard it would be. It was also astonishing to see how large of an area the physical plant took up and see the construction that was still ongoing because we were then able to have further conversations about whether the cost of building the plant is worth the benefits of the plant producing electricity for Switzerland—a very important topic when nuclear power plants are considered. 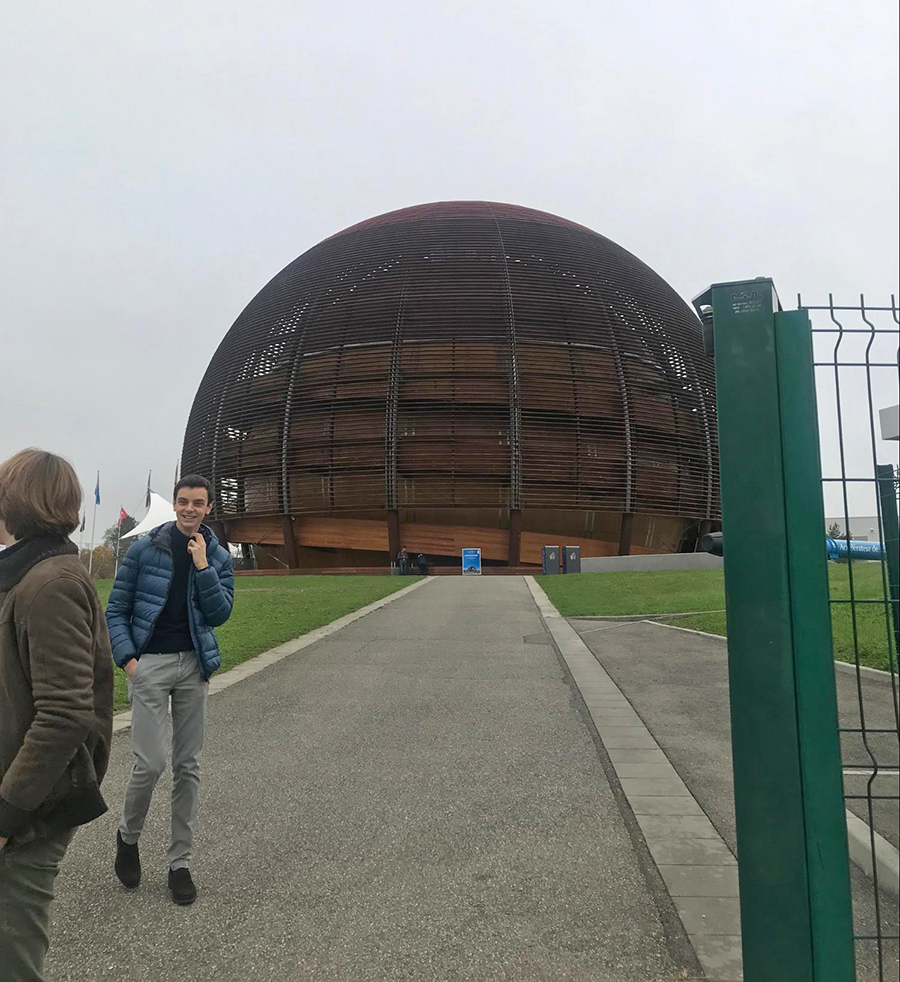 Sadly, the trip’s last full day in Geneva had come. The visit to CERN, a state-of-the-art facility where scientists from around the world can experiment with the world's largest and most complex scientific instruments, was the most extensive day of the trip. We had the fascinating opportunity to do a hands-on experiment and learn the science behind said experiment in the S’Cool LAB of CERN. This is an opportunity that physics students are so privileged to have every year with TASIS, and it was truly amazing to be able to do an experiment with unbelievable tools such as dry ice and then have the science explained to us afterward by a real scientist. After the experiment and the lunch that followed, we had a short presentation and Q&A with a guide who was also previously a physicist aspiring to work at CERN alongside many other engineers and physicists. He guided us through the different stations of CERN and helped further explain how CERN works and what CERN does specifically, and he answered any questions we had. This was a quite ironic situation, as this tour really helped me see how small the world is because our guide happened to study and grow up in the same region of the United States as I did. No matter how separate you may think a simple school trip is to your life, many thousands of miles away, there is always something that ties you to everything in the span of the world. As we read and were told about the physics that tie every living thing to each other, our group truly realized that if physics is a strand that ties all of life together, there is also always some strand that ties your life together with every single thing you do. It was very interesting to go to the different CERN particle detectors because, though they were all still fully functional, they also altered certain parts of the stations for visitors to be able to take these tours and learn as they are exploring. 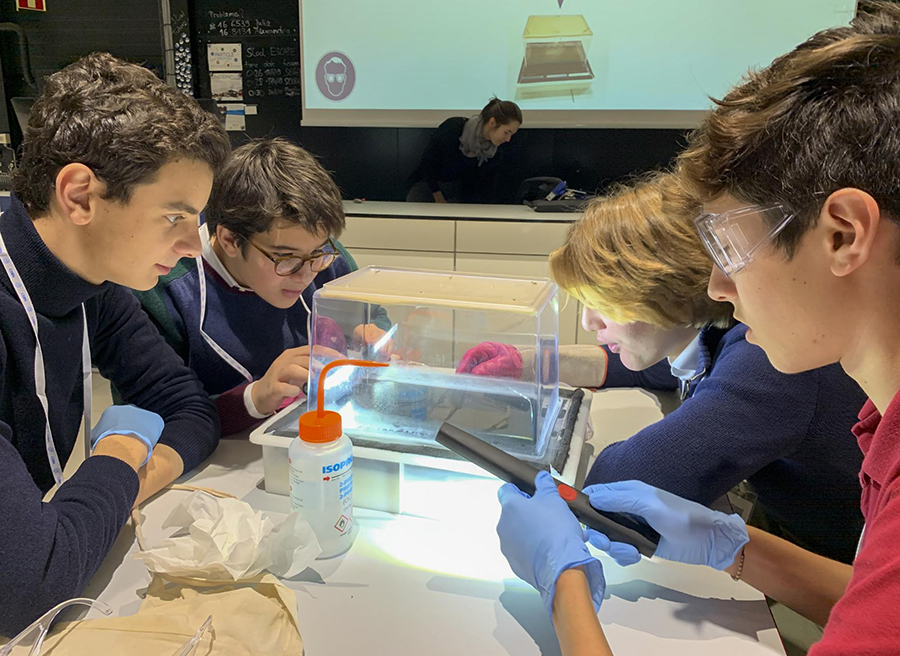 The beauty of Bern and Geneva helped this small group of students and teachers realize the beauty threaded throughout the world thanks to physics, and this trip was unforgettable. Never in my life would I have thought that I would spend my time at a nuclear power plant or looking at large wind turbines on the beautiful hills of Switzerland, but that is the path my life has decided to take me on, and I am forever grateful for it.

As physics is an essential part and explanation for everything in life, TASIS will always be an essential part of helping me grow to be a global citizen, especially through extraordinary Academic Travel trips like this one.