From Albania to Zambia: 62 Nations Represented at TASIS Parade of Flags
Feb 12 2018 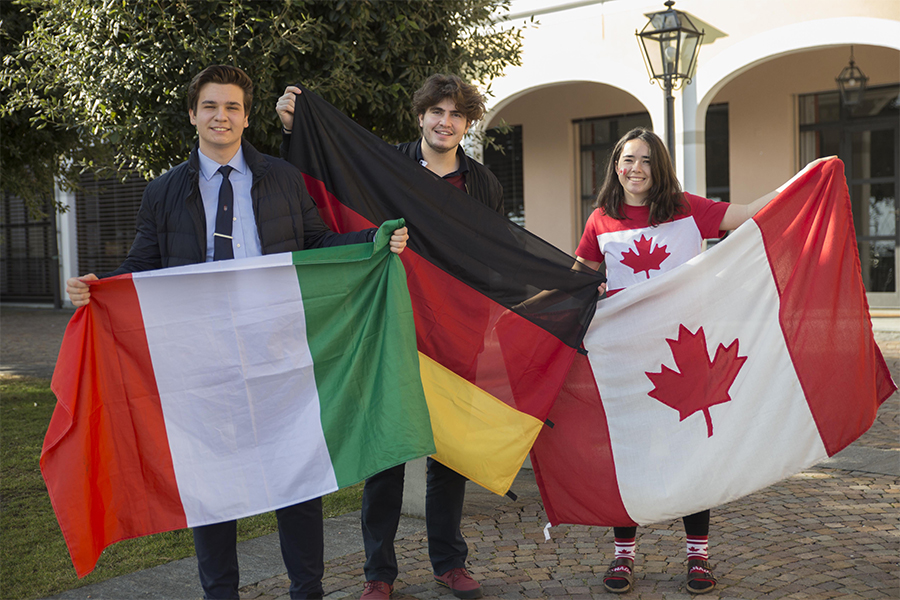 International Week is a treasured annual tradition at TASIS The American School in Switzerland, and the School commenced the 2018 edition on the morning of February 12 with a moving Opening Ceremony that included remarks from Headmaster Christopher Nikoloff, an enthusiastic Parade of Flags, the presentation of Torch Awards to 14 students, an inspiring student speech, and excellent musical performances from soloist Serena Bardi '18 and the combined School Choirs.

Mr. Nikoloff, who became TASIS Headmaster in July 2017, opened the ceremony by noting how honored he is to participate in his first International Week at TASIS, as retired Headmaster Lyle Rigg and many others have told him it may be the best week of the year. He explained that he has found TASIS to be both a very welcoming and a highly international community—one that currently represents more than 60 nations, has 110 students with multiple nationalities, speaks more than 40 mother tongue languages, and boasts of 215 students who speak at least two languages.

Mr. Nikoloff then turned the podium over to Shiva Mirchandani ’18 and Katherine Kelly ’19, who introduced the flag bearers from 62 different nations. Most flags were carried by the youngest and oldest TASIS student (and a Middle School student) representing the given nation.

The Parade of Flags was followed by senior Serena Bardi’s excellent performance of Alan Menken and Stephen Schwartz’s “Colors of the Wind,” a song about embracing one another’s differences.

Maria Svetlova, who came to TASIS when she was just six years old and is now in grade seven, delivered an impressive speech in which she discussed some of the challenges she faced when she first came to Lugano and how TASIS has, in time, become her second home.

The ceremony continued with an inspiring medley of the African traditional song “Wana Baraka” and K’naan’s “Wavin’ Flag” performed by members of the Elementary School, Middle School, High School, and Faculty Choirs.

Mr. Nikoloff then returned to the podium to thank the many students, faculty members, and staff who worked together to make the Opening Ceremony such a success, and he reminded everyone of the many International Week events still to come.

Nations represented in the 2018 Parade of Flags