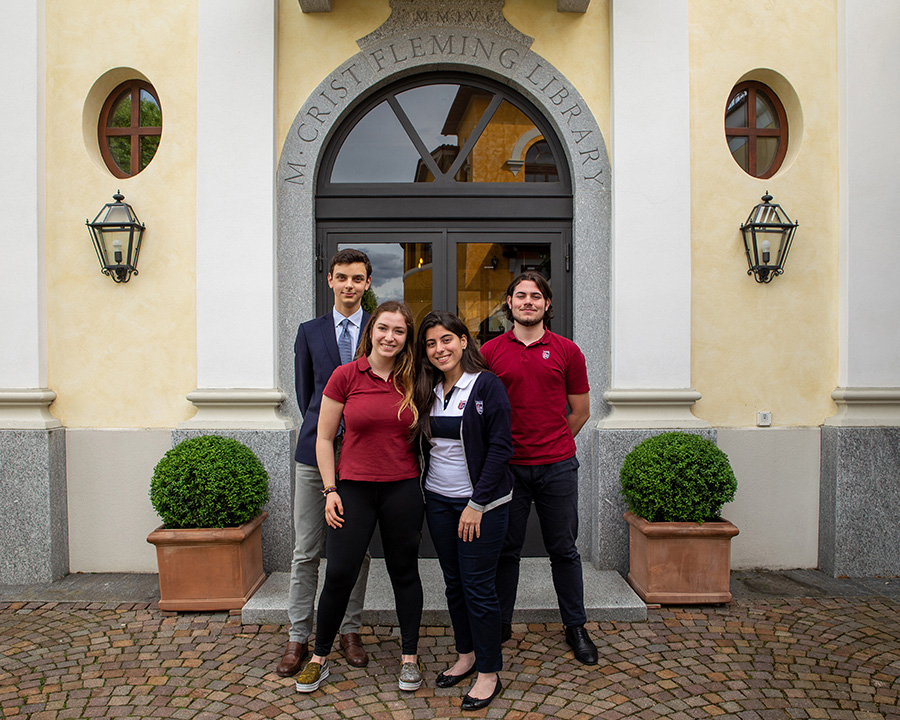 Each spring the TASIS High School faculty selects three service-minded students from grade 11 to receive the distinguished Junior Awards—two established by alumni in the early 2000s and one established by the faculty in 1997. High School Academic Dean Dr. Mark Abisi presented the first award at the Academic Awards Assembly on May 28 and delivered the following citation: 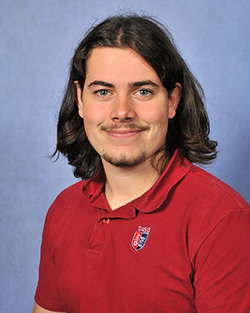 The J. Michael Horak Award was created in 1997 to honor a departing faculty member who had provided inspiring service to the student body, and who was often able to galvanize the entire school into believing that what can be attempted can be completed.

This award—conceived, organized, and voted on by the faculty exclusively—recognizes a junior who gives spontaneously and tirelessly of himself or herself to the many and varied needs of the student body.

This year’s recipient is an unfailingly kind, generous, and mature soul with a sense of natural empathy. A dedicated proctor, he is described by his advisor as “a glass three-quarter-full person who brings his best self to each day and shares himself generously with all around him.” His Global Service Program leader concurs, mentioning his tireless work ethic, relentlessly positive attitude, and respectful nature, adding that although he expects nothing in return for his actions, it is clear that he takes great pleasure in giving to others.

The TASIS faculty is proud to present the 2019 J. Michael Horak Award to Giovanni Volpi.

Director of Alumni Relations Yvonne Procyk introduced the final two awards at the High School’s Farewell Assembly on May 29, setting the stage with the following remarks:

“It is my pleasure to present two scholarship awards that have been created and funded by TASIS alumni: the Pritzlaff Leadership Award and the Cathy Clark Memorial Scholarship. Voted on by the entire High School Faculty, each of these awards recognizes a junior for exemplary dedication and involvement in community service, which has always been an important part of a TASIS education. Our Founder, Mrs. Fleming, advocated this from the start, putting it into words thus in 1990: ‘I believe we are put on this earth to make some contribution, to try to leave it a little better place than we found it.’”

Ms. Procyk then announced that this year there would be two recipients for the Pritzlaff Leadership Award and one for the Cathy Clark Memorial Scholarship, introducing the winners as follows: 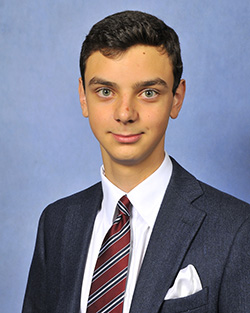 The Pritzlaff Leadership Award was established in 2001 by alumnus John Pritzlaff '72, who has been a loyal friend and donor to the School while also serving on the Board of Directors. The Award recognizes a junior who takes a leading role in community service outside the School, encouraging the involvement of other TASIS students in the public service ideal. The $1,500 award may be used for educational expenses or donated to a non-profit organization of the recipient’s choice. Past recipients of the Pritzlaff Leadership Award are listed on a plaque in the Villa De Nobili dining room.

The first Pritzlaff Leadership Award is being presented to a young man with a firm sense of self and ethics and a willingness to engage with adults and students to discuss topics both serious and light. Not afraid of speaking his mind, he regularly promotes positivity and forward action among his peers, taking a stand against negativity or hypocrisy. Conducting himself with impressive maturity and compassion for others, he is committed to his own high academic standards but also to the academic achievements of his peers, creating study packets for his classmates for English A and co-founding a math club for IB students. Service outside the TASIS community has become a further outlet for this young man’s intellect and energies. The Service Learning trip to Mongolia last June made a profound impact on him that he continues to reference today and led to him taking a leadership role in the Understanding Ulgii group, where he encourages his peers to show the same strong commitment to that community as his own.

It is a great pleasure to present the 2019 Pritzlaff Leadership Award to Giorgio Cardani. 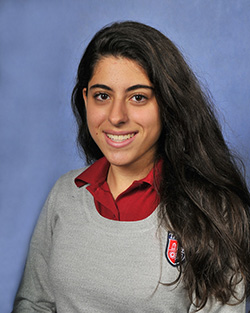 The second recipient of the Pritzlaff Leadership Award is a student who is cheerful, lively, and courteous. Always positive, she has made much of the TASIS experience since joining the School last September. Despite the academic demands and her diligence in the classroom, this young lady has sought out opportunities to serve in many fields, leading her advisor to call her “the very model of service.” Her leadership extends to sports, having taken on coaching responsibilities for middle school volleyball, while as a proctor her peers comment about her kind-hearted nature and willingness to help those around her. With seemingly unlimited enthusiasm, she plays an active part in not one but two Global Service Program initiatives, one local and one international—the only student to have taken on this double commitment. In both these groups she stands out as a role model, inspiring not only her peers but all those around her as well.

It is a great pleasure to also present the 2019 Pritzlaff Leadership Award to Giulia de Cristofaro. 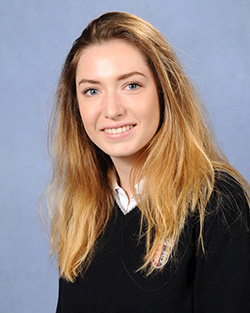 The Cathy Clark Memorial Scholarship recognizes and rewards a student who, in the judgment of the TASIS community, demonstrates exceptional dedication to community service. The award comes in the form of scholarship aid to assist in covering tuition expenses or educational travel.

The award was established by alumni parents Lt. Colonel Robert and Mrs. Ann Clark to honor the memory of their daughter, Catherine, who attended TASIS for six years, graduating in 1987. After attending George Mason University, she served in the headquarters of the Bureau of Alcohol, Tobacco and Firearms (BATF), in Washington, DC. Known for her unfailing cheerfulness and compassion, Cathy was also cited for her distinguished service and for developing an outstanding AIDS awareness program. She died in a tragic automobile accident at the age of 26 while driving across the country from Virginia to her new duty station in California. Cathy believed that TASIS had provided her with some important life lessons and her parents established this $3,600 scholarship award in her memory to reward and inspire other TASIS students to follow her commitment to public service.

This year’s recipient stands out for her wide-ranging involvement in service. For the drama department, this young lady has been a reliable and efficient member of the backstage crew, willing to jump in at short notice to fill a need and see the project through. She also served on one of the School’s re-accreditation committees, adding great value to that committee while ably representing the student point of view. Furthermore, in what might seem like a contradiction to the humility for which she is known, this student is outspoken on issues that are important to her, and she will rally others to join her in tackling something that needs clarification or action.

The Global Service Program is another arena in which this young lady’s qualities have shone, and she went above and beyond the requirements while on the Ethiopia trip, making an impact on the whole community. The trip leader comments, “Not only did the local students love her, but their teachers were thanking me for bringing her on the trip.” Since returning, this young lady has actively raised funds and awareness for the group as well as for service in general, speaking with conviction at an assembly to encourage a belief in service among her peers.

It is a great pleasure to present the Cathy Clark Memorial Scholarship for 2019 to Hanna Osgood.