The TASIS community bids a reluctant farewell to Headmaster Lyle Rigg, who agreed to come out of retirement for the third time in 2015 to devote two full academic years to the School he began serving in 1979. Mr. Rigg steps away as the longest-serving Headmaster in TASIS history, with 23 years of administrative experience at TASIS Switzerland and TASIS England.

Mr. Rigg began his storied career in England in the fall of 1979, taking on the roles of Assistant Headmaster, Head of Residence, and History teacher. TASIS Founder M. Crist Fleming asked him to come to Switzerland to serve as Headmaster three years later, and he was joined by his new wife, award-winning children’s author Sharon Creech, who had also come to TASIS England in 1979. Mr. Rigg returned to England in the fall of 1984 to serve as Headmaster, a role he fulfilled with distinction until 1998 before leading the Pennington School in Princeton, NJ, until his initial retirement in 2006.

The TASIS community is deeply saddened to see Mr. Rigg go but grateful to have spent the last two years with him and pleased that he will finally get a hard-earned break. He was serenaded with a song and presented with a tribute book at the end-of-year Faculty Celebration on the evening of June 8 in order to to help him remember just how valuable he has been to the lives of hundreds of students, faculty members, and staff in both Surrey and Lugano. Click on the image below to read the many wonderful things Mr. Rigg’s colleagues had to say about him. 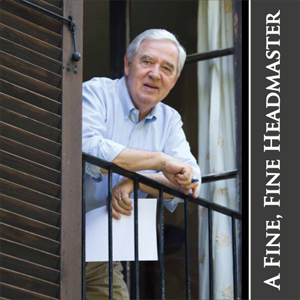