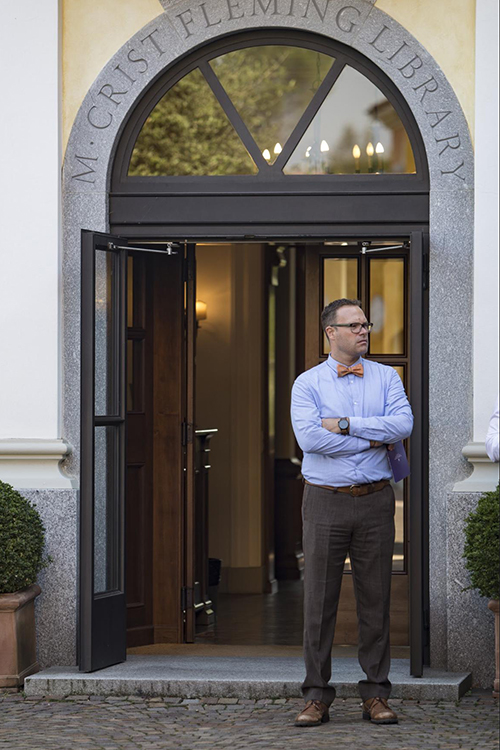 When did you start at TASIS, and what do you now do for the School?
I started in the 2011–2012 school year. I am currently the High School Dean of Students and also teach one section of AP US Government and Politics. I also coach Middle School lacrosse to try to get kids interested earlier so that they'll play in high school.

How would you describe your teaching philosophy?
I like teaching a lot because I feel like I learn just as much as the students do—that I am as much of a student as they are—and teaching AP US Government and Politics here is especially interesting because so much of what the framers of the Constitution chose to do was based on European philosophies. I'm always looking for new and different ways to approach teaching, and I think the School has so many great teachers I can learn from as well. Every student is different, so it's necessary to try different tactics to get them involved and keep them motivated to learn. I also try to use as much comedy as possible to keep my students engaged.

What do you want your students to take with them at the end of your class?
I think it's important for my students to know that no matter what, when it comes to research they should never just accept their first source of information. I want them to question all sources and to reach their own conclusions based on facts rather than news stories that are being thrown at them. I also want them to understand the importance of being involved in the government—not just being a victim of it—by making sure they take advantage of the opportunities they have to vote, to protest, or to contact their representatives. To create a sense of action that makes a difference is something I hope students walk away with, regardless of which government they live under.

Can you please describe your educational background and your career in education prior to TASIS?
I'm getting old so that's going to be a longer answer. I played lacrosse at a very big high school in New York, which helped drive my decision to attend Denison University in Ohio. Some large universities recruited me, but Denison was the only small school and I loved the idea of smaller class sizes and closer interactions with my teachers. I went on to major in History with a focus on International Relations, and leading up to my graduation I sent out a bunch of resumes to independent schools, but nothing panned out.

My brother was going to work on a dude ranch in Wyoming that summer, so I called the ranch and asked if they were looking for a cook and they said sure. I spent that summer riding horses and competing in rodeos. I also got a call from a woman at a school in Indiana—Culver Academy—and she asked if I would be interested in flying out to interview for an internship. I flew out from Wyoming, interviewed, and was hired as a teaching intern to teach leadership and help out with the athletic program.

I took the job in September and met Emily White in January of 2003. We started dating and were engaged after six months. I was there for two years. Her alma mater, Western Reserve Academy in Ohio, offered us both jobs. I started off in the Dean's office and coached lacrosse. I also taught history, philosophy, public speaking, and a bunch of other things while I was there.

What do you like most about working at TASIS?
I would absolutely say the students. Because of my job, I work with the more difficult aspects of high school life—the discipline side of everything. Going to class and having interactions with students is the best part. It's why I see myself never working anywhere other than in a high school. I think it's the students that revitalize me and keep me young even though I might not look it. Absolutely, it's the students.

What has been your greatest achievement at TASIS—something that has made you proud?
There isn't one single, giant achievement I've had. I feel that I'm at my best when things are bad, when I have a bad discipline case. By bad, I mean just difficult—when a student leaves my office because they have to leave campus permanently and I'm dealing with their parents. If at the end of that interaction I have the student or the parent thank me for everything—yeah, thank me—then I feel that I've done something right. Often everyone is emotional and upset, but in the end they understand that we're simply doing what needs to be done. They thank me for helping them through it all. If I can achieve that, I feel like I've done my job well.

What motivated you to come to Switzerland?
From the moment we first met, Mrs. McKee and I had always talked about working at an international school. We finally decided to apply to a company that places teachers internationally, but we still weren't sure about actually going anywhere.

My father had been battling ALS, and in January of 2011 he passed away. We went back to New York for his funeral. My brother met us there with his daughter and his wife, who was five months pregnant. We were preparing for my father's funeral and started talking to my brother and his wife. They told us that working abroad was something we should do because my father was a Spanish teacher who traveled all over Europe. My sister-in-law said, "If you don't do it now, you're never going to do it."

When we got up for my father's wake the next morning, my sister-in-law was sick. My brother took her to the hospital while we went to the wake. During the wake, we got word that she had a brain aneurysm. He had the choice of having to save his wife or the baby. He made the call to try to save his wife, but when they tried to do the operation, unfortunately the damage was too severe. She died that day. My father was being buried, and we had to rush to the hospital.

In light of my father's passing and the interaction we'd had with my sister-in-law the night before, we both felt, "We have to do this. Now is the time." And so we decided to attend a hiring conference in Boston not long after that. We were willing to look anywhere. When you start looking through international jobs, especially through the company we worked with, they tell you that European posts are some of the most sought after.

At the time I was a history teacher and Grade Dean, and my wife worked in admissions. We learned at the hiring conference that TASIS just so happened to be looking for a history teacher/Grade Dean and an admissions person, so it was a perfect fit. Faced with the unexpected opportunity to move to Switzerland, we started researching Lugano and decided it was where we wanted to go. That was that and we flew over. It was all very emotional.