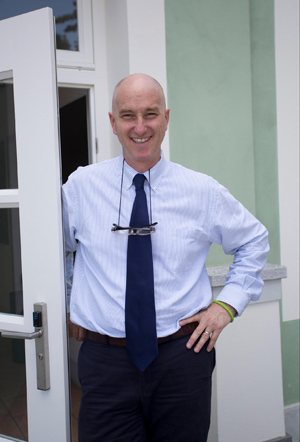 When did you start at TASIS, and what do you do at the School?
I started in January of 2013. I was hired because Ms. Fibbioli was going on maternity leave, so the School needed a photography teacher. I had been living in Lugano at that point for a year and a half, and my wife was working at SUPSI, which is the applied science university in Lugano.

Can you please discuss your educational background and your career in education before TASIS?
I have a bachelor's degree from the University of California, San Diego, where I enrolled as a history major and then changed my major a bunch of times. Finally I ended up getting a degree in Art, much to the shock of my parents, and then to really shock them I went to film school. I also had worked in radio while I was in college, and I worked for a radio station before I started film school.

When I finished film school, I went to work freelancing on a series of industrial films. I worked for a company that made promotional films for other companies that built or sold houses. Then I worked the production arm of WQED, which made an educational program that was satellite distributed directly to schools in the years before there was direct commercial satellite TV.  I was a videotape editor for the show and did some sound recording. I then freelanced for a couple of years as a production sound recordist.

I later I had the great opportunity to work as an assistant for an architectural photographer, Morley Baer, in Carmel, California. This job was a great learning experience in all aspects of photography and in managing and maintaining a library of images in the pre-digital era. I also taught and assisted at a number of photography workshops in those years.

My teaching philosophy is about slowing down and observing, learning to look, learning to see things, and learning to recognize things that will be pleasing to your eye.

Returning to Los Angeles, I went to work on some low budget film projects, and eventually I was contacted by some friends at a company called Danetracks that did cinema post-production sound editing, and this led to the job that everyone wants to talk to me about: working on The Matrix. It ended up winning an Academy Award in 2000, a few days before my son was born, so I have a picture of me holding my son next to my wife, my boss Dane Davis, and the Oscar.

During this period in Hollywood I had my first experiences teaching high school when I was a guest of the Los Angeles Unified District Art School to teach some video editing and sound editing techniques.

I moved to Italy in 2001 with my wife and family. While my wife was working in her field, I was helping run a bed and breakfast in Tuscany and worked for a tour operator in Florence. I was able to escape that job to get back into photography when I was hired to teach at the Florence Institute of Design International. I taught Digital Photography in Florence until I was hired at TASIS.

Can you briefly describe your teaching philosophy?
I believe that teaching art and photography should be fun, and I am always sensitive to the fact that students have other classes that require enormous amounts of study and concentration. I want them to study art and work hard on their photography, but I also want it to be something enjoyable that serves as a break from the other disciplines—to help them achieve balance in their lives. My teaching philosophy is about slowing down and observing, learning to look, learning to see things, and learning to recognize things that will be pleasing to your eye.

What do you like most about working at TASIS?
I enjoy the interaction with students most of all. It is the most fun part of the job. I would also add that I get to spend time with amazing people who happen to be my colleagues, and they are wonderful to collaborate with. I am very fortunate to be working in this department.

If you could teach any other class for one day, which would it be?
I sometimes think it could be interesting to teach an English or TOK class, but I think one day would probably be fine. I would not want to do much more than a day because I know that that is also very hard.

Student artists closed down each session of the 2022 TASIS Summer Programs with a vibrant celebration of the arts. See an archive of the wonderful performances and exhibitions.

TASIS The American School in Switzerland students took 264 Advanced Placement exams this spring and scored a 4 or higher on 50 percent of them. The 46 AP Scholar Awards smash the previous high of 37 that was set in 2021. Learn more about this year’s outstanding results.

Eight TASIS students scored 40 or more points on the May 2022 IB exams, and Class of 2022 Valedictorian Alexia Dochnal achieved the first perfect mark in school history! The mean score posted by the 39 students who earned an IB Diploma was 35—a full three points above the 2022 worldwide average. Learn more about this year’s results.

Read More about This Month at TASIS: June 2022
Powered by Finalsite