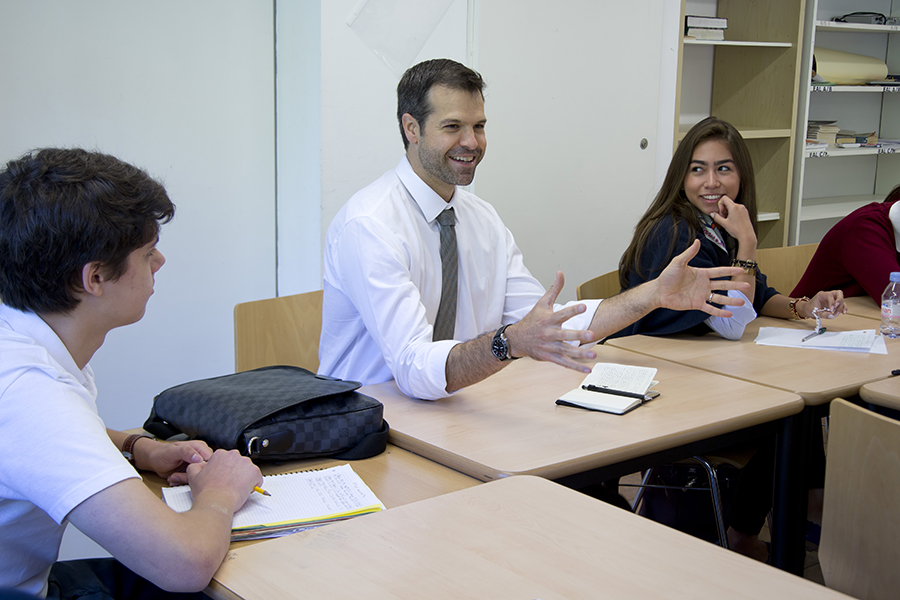 Aurelia Dochnal ’19 interviewed High School English Teacher Dr. Christopher Love, who has a Ph.D. in Comparative Literature from the University of Michigan and taught at universities in both the United States and Turkey before coming to TASIS in 2012.

What else are you involved with at TASIS?
It’s an unusual time to ask that question because I’m expecting a daughter very soon, so this year I haven’t been able to do what I love to do, which is be part of Nuovo Fiore Ethiopia, one of the Global Service Program groups. I also led Model United Nations and coached basketball last year. I am part of the Senior Humanities Project, and of course the thing that I love this year is to be sitting with everyone doing the Dante Club [an after-school club led by Dr. Love in which the students read Dante’s Purgatory and Paradise and discuss it as a group].

Can you please describe your educational background and your career in education prior to TASIS?
As an undergraduate I studied Literature and a bit of Philosophy and Economics, actually. Then I got my Ph.D. at the University of Michigan in Comparative Literature and wrote about ancient Greek tragedy [for my dissertation].

I lectured in Classics at Northwestern University and was also a professor at the University of Michigan. After that I taught and did research in Turkey at Bilkent University in Ankara, and then I came to TASIS!

Can you briefly describe your teaching philosophy?
I think “philosophy” might be too grand a word, but I would say maybe the question, if I can rephrase it, could be “What makes me most excited about teaching?”

I would definitely say that what always makes me most excited is when I see students asking “Why?” rather than “What?” What I mean by that is I have always felt like life, especially today, pushes you to ask “How best can I do something?” and very rarely asks “What is the best thing to do?”

I always love literature’s capability to put the question “Why?” into human perspective and to allow students the freedom to think through their own lives via the imagination of other lives, in a way that can clarify and deepen their understanding of life. I think that the process of reading and writing works like Shakespeare and Dante are key to this process.

What do you like most about working at TASIS?
Without a doubt, the fact that TASIS students are from everywhere. To teach Dante and have Italian students explain to other students the meaning of the language and what it means to them, and then to turn and have Russian students talk about Dostoevsky or Tolstoy and explain it to everybody else is great.

When I first came in, an experiment that I decided to run was to set up what I called the “International Poetry Unit.” I had each student present a poem from his or her country in his or her language. To see the ability of students to present their country, their literature, their culture in a way that it would actually mean something to everybody else and to have everybody exposed to so many different countries was, to me, the essence of literature. I don’t think you can get that in many other places in the world, and TASIS is supreme in the opportunities it gives its students.

What would you say has been your greatest achievement at TASIS—something that has made you proud?
I think the proudest moments I’ve had are when students came to me asking to be part of the Dante Club because it meant that there was something entirely voluntary about the process and that really meant a lot to me. The fact that students were so inspired by Dante in my class that they would want to keep going past Inferno to read Purgatory and Paradise was wonderful. More than anything else I’ve been a part of, the fact that students themselves were so curious and wanted to know more is what makes me the happiest. It makes me proud of all the students who wanted to do that.

I know you are very passionate about the material you teach. Which is the work you feel most strongly about that you teach in any of your classes?
It’s, as you know, a very cruel question for me…a very cruel question. I’ll say this though. We are in Ticino, right across the border from Italy. So here at TASIS, it has been a special pleasure and privilege to teach Dante’s Inferno. It’s not just that it’s the work of a lifetime, so to speak. What’s more, our Honors class goes to Florence on Academic Travel to experience it there. I also feel that Dante poses, in one single work, all of the most important questions in life in a way that you can’t quite get from Shakespeare if you read one, two, or three of his plays. To get the same kind of understanding of Shakespeare, I think you have to read many of his plays: the comedies, the histories, the tragedies. It’s the same thing with many of the other writers. With Tolstoy, for example, if I could teach both War and Peace and Anna Karenina, that would provide some more scope.

Dante, even one third of his Divine Comedy, seems to do what I really love the most about literature: ask the biggest questions and force us to think through those in the clearest way possible.