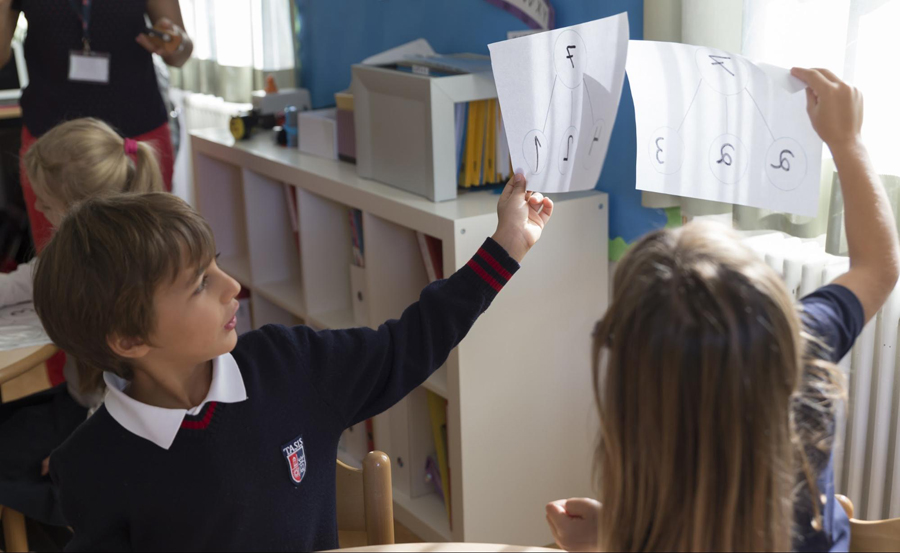 The world-renowned Singapore Math program, which focuses on building fundamental math skills so that students have a strong foundational base to draw upon when they undertake more advanced studies, has been a key component of the TASIS Elementary School’s Core Knowledge Curriculum since the School opened its doors in 2005. First developed in the 1980s in Singapore, a country that now has the world’s highest-achieving primary and secondary pupils in both math and science, Singapore Math breaks content down into a concrete–pictorial–abstract learning progression and emphasizes real-world, hands-on experiences. This year TASIS has decided to switch from Primary Mathematics to Math in Focus, a new textbook alternative for schools that wish to deliver an authentic Singapore Math program.

In the late 1990s, Primary Mathematics became the first Singapore Math series to be broadly distributed in North America by Singapore Math Inc.® Early-adopting schools used the program with great success, and it quickly rose to prominence in the United States and Canada. In an effort to produce more creative students, Singapore later made some alterations to its math education and allowed for the introduction of other syllabi, one of which was named My Pals are Here Maths. Houghton Mifflin Harcourt adapted My Pals are Here Maths for the US market and changed its name to Math in Focus, and the textbook series became available to US schools in 2009.

Theresa Cullen Hill, who became TASIS Elementary School Head in the fall of 2015, pushed for the move to Math in Focus—which begins in Kindergarten and continues through grade five—in advance of the 2016–2017 academic year because she felt it would be a more effective way to help all students reach their potential.

“Primary Mathematics had students leveled into different workbooks, which meant that not everyone had equal access to the curriculum,” she said. “That meant that by the end of fifth grade, not everyone had been through the same curriculum—whereas in Math in Focus the core curriculum is the same for all students, and then there are differentiating materials for students who need more advanced work or for students who need more support.”

Primary Mathematics can feel a bit dry by comparison and doesn’t encompass a lot of resources, whereas Math in Focus offers a wealth of supplemental materials. It’s a very full program, and the first year of implementation can be difficult as teachers figure out how to make the best use of the abundant resources. 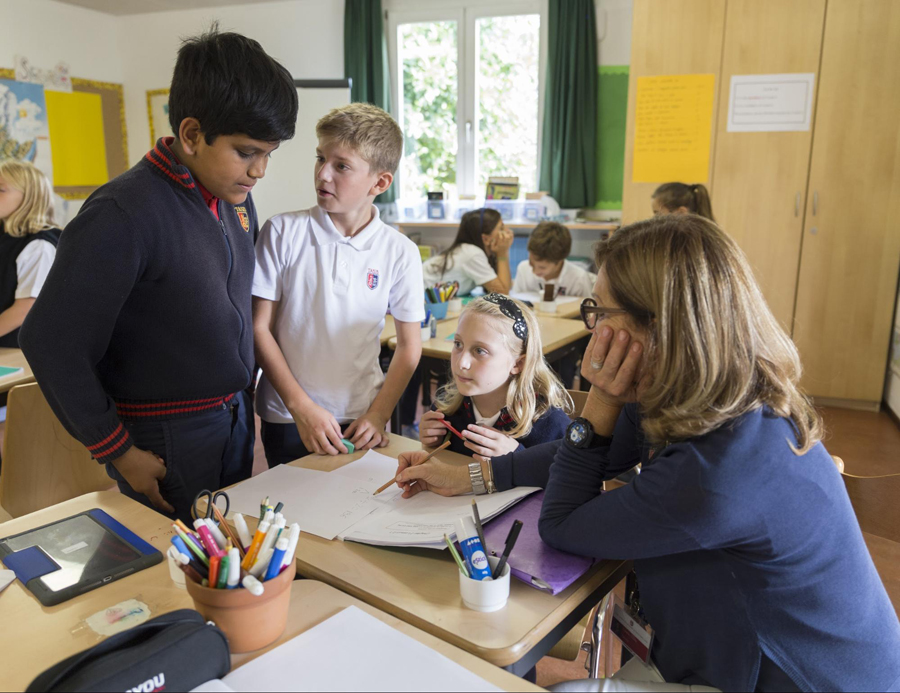 To help with the transition, Ms. Cullen Hill invited Math in Focus expert Ann Bremner to campus this March. The Director of Lower School Mathematics at St. Stephen's & St. Agnes School in Alexandria, Virginia, Ms. Bremner spent three full days observing classes, meeting with teachers, and offering advice. She was particularly well-suited to answer questions given that her school implemented Math in Focus in 2015 and is now in its second full year of the program.

It hasn’t taken Ms. Bremner long to conclude that Math in Focus is the best program out there. “We’ve seen incredible results,” she said. “It’s taken our math to a whole new level.”

That is not to say that the first year was without its challenges.

“The first year is tough because you’re figuring out the program, and it changes the way a lot of teachers teach. Math in Focus generates much more conversation amongst the students, and the program really pushes them. They must explain what they’re doing and why they’re doing it. And while they’re showing what they know, they must also show that they can apply it to a novel situation. All of this was a big adjustment for our teachers, but our students have really risen to the challenge.”

Everything Ms. Bremner has seen in year two has convinced her that the challenging transition to Math in Focus was well worth the effort.

“Teachers across the board have commented about how incredibly pleased they are with how well-prepared their incoming students are,” she said. “They’ve been able to do so much more in class because the students have come in with a much higher level of understanding.”

Ms. Bremner was impressed with what she saw from the TASIS teachers, and she feels strongly that the School is on the right track as it nears the end of the challenging transition year.

“I think it’s going great,” she said. “The teaching I’ve seen here at TASIS is what Math in Focus is all about. The math classes are noisy (in a good way), and the students are engaged. They’re sharing their thinking, and there’s a lot of discussion. That’s the main tenet of the program, and they’ve got that. And now it’s just the final piece of covering all of the curriculum and figuring out how to construct the best schedule.” 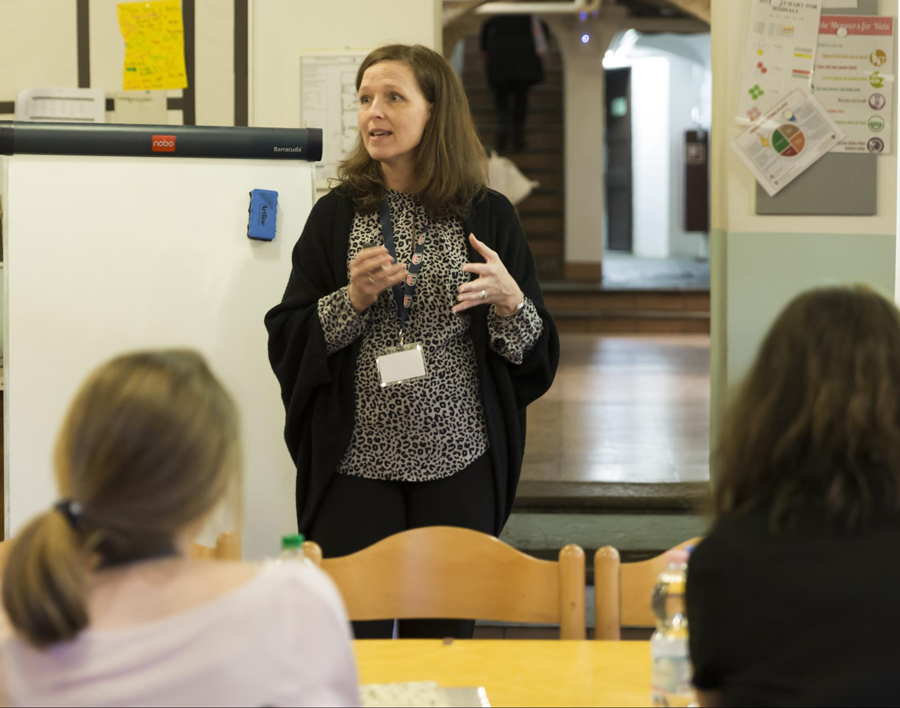 Ms. Bremner was similarly impressed with the TASIS students, particularly in light of the fact that the Elementary School student body comprises more than 25 nationalities and speaks more than 15 mother tongues.

“I think they’re doing extremely well, especially when you consider how challenging the language is in Math in Focus,” she said. “I can’t imagine that it’s easy for non-native speakers to grasp, but the students at TASIS seem to be handling it very well. I was very impressed by what I saw in all the classrooms.”

TASIS has already begun to see some tangible results. Back in the fall, students in grades 3–5 took the Measures of Academic Progress (MAP) test and produced excellent results on the Math section, scoring well above the worldwide averages for international schools.

“These tests are really designed to measure the academic progress and growth for each student,” said Ms. Cullen Hill. “It will be interesting to track our math scores as we continue to grow with the Math in Focus curriculum.”