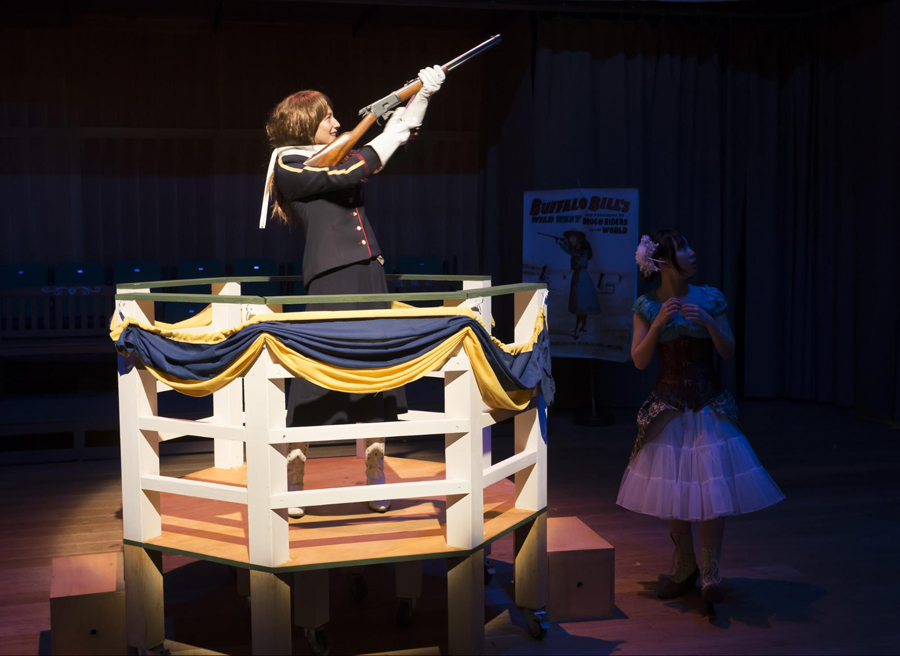 High School Theater Director Valerie Bijur Carlson, a brilliant student cast, and a dedicated production crew deserve a great deal of commendation for delighting audiences with three outstanding performances of Annie Get Your Gun, the classic American musical based on the life and legend of Wild West sharpshooter Annie Oakley and featuring songs by the incomparable Irving Berlin, over the weekend of April 13–15.

While we are not allowed to distribute the full musical due to licensing restrictions, we are permitted to share up to three minutes of highlights. Please enjoy the following quick look at the Opening Night performance on April 13, and learn more about the musical below.

Annie Oakley is the best shot in Darke County, Ohio, and she manages to support her little brother and sisters by selling the game she hunts. When she's discovered at a shooting contest, Col. Buffalo Bill persuades her to join his Wild West Show (“There’s No Business Like Show Business”). It only takes one glance for her to fall head over heels for dashing Frank Butler, who headlines the show. She soon eclipses Butler as the main attraction, which, while good for business, is bad for romance (“Anything You Can Do, I Can Do Better”). Butler hightails it to join a rival show, his bruised male ego leading the way, but is ultimately pitted against Annie in a final shoot-out. While highly fictionalized, the musical pays affectionate and humorous tribute to the real-life stars of Buffalo Bill’s Wild West Show and the love match (as well as the shooting match!) of Annie Oakley and Frank Butler.

Director Valerie Bijur Carlson on the History Behind the Show 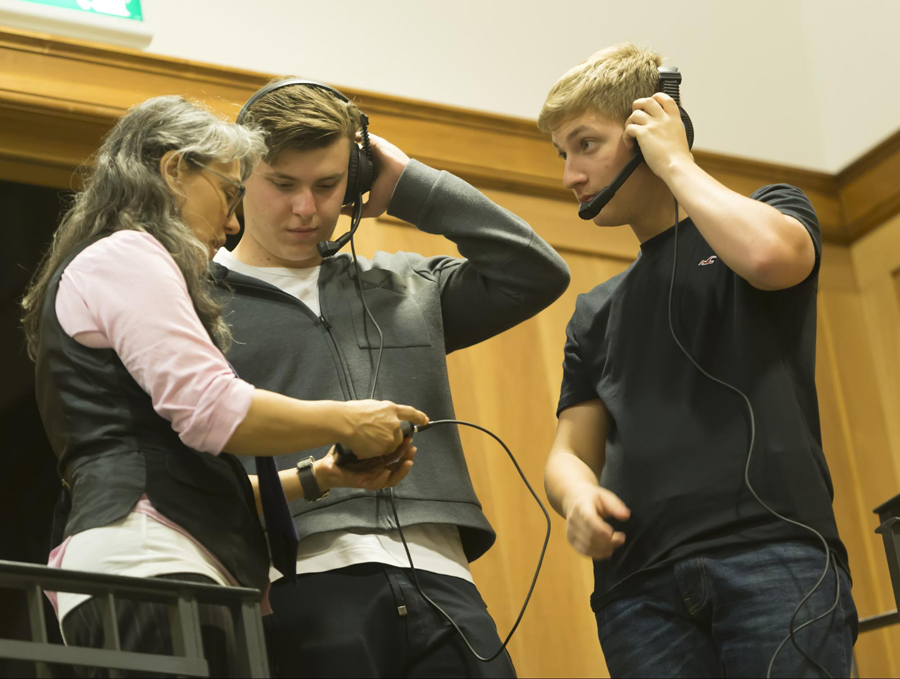 See more of Kim Nelson’s outstanding photographs from Annie Get Your Gun on the TASIS Smugmug page.

Delving into the dramaturgy (contextual research) for this classic piece of American musical theater has yielded a rich vein of historical knowledge for me and the company. The real people behind the characters and the actual events behind the plot are extraordinary! Here is a little of that history for you.

Was Annie Oakley really that good? Yes! The feats of marksmanship she could pull off consistently were remarkable. She could shoot the heart out of a playing card, the flame off of a candle, an apple off her pet dog’s head, and hundreds of targets tossed into the air in a row. She was such a superstar in her day that she performed for the crown heads of Europe and earned an enormous amount of money in prizes and salaries. You can find out more about Annie and the rest via the links provided in the Historical Figures section below.

Why do we still know Buffalo Bill and his Wild West Show? Colonel William F. Cody—Buffalo Bill—is generally credited with creating the worldwide mythology and vision of the United States’ Wild West: Cowboys and Indians, stagecoach hold-ups, roaming buffalo herds, and expert marksmen (and women!). Some historians also think he’s responsible for preventing the extinction of buffalo because of his promotion of that animal (he traveled with a herd of 60!).

What’s up with the film at the top of Act II? Annie, Buffalo Bill, and the rest intersected with some amazing history. In 1894, as he was experimenting with the invention and use of film, Thomas Edison himself recorded Annie performing (with Frank Butler assisting her). You can see it on YouTube! The Wild West Show performed in Paris at the opening of the Eiffel Tower, for Queen Victoria and Kaiser Wilhelm of Germany just a few years prior to that, so I thought making a promotional “news reel” of those events would be the perfect way to include that history.

Sitting Bull was a real Sioux chief and warrior. He defeated General Custer at the Battle of Little Big Horn. Is his part in this show really true? Actually, yes! He really was so impressed with Annie that he officially adopted her, and he really traveled with BB & the WWS for a year. Things weren’t easy for Native Americans—even a celebrity like Sitting Bull (alluded to in the script)—so this show was a boon in many ways.

Annie and Frank—true story? Yes! The timeline has been adjusted for dramatic purposes, but Frank became smitten with Annie, they married within a year of the famous [Act 1 shooting match], and they were a devoted couple for the next 50 years—literally the rest of their lives. 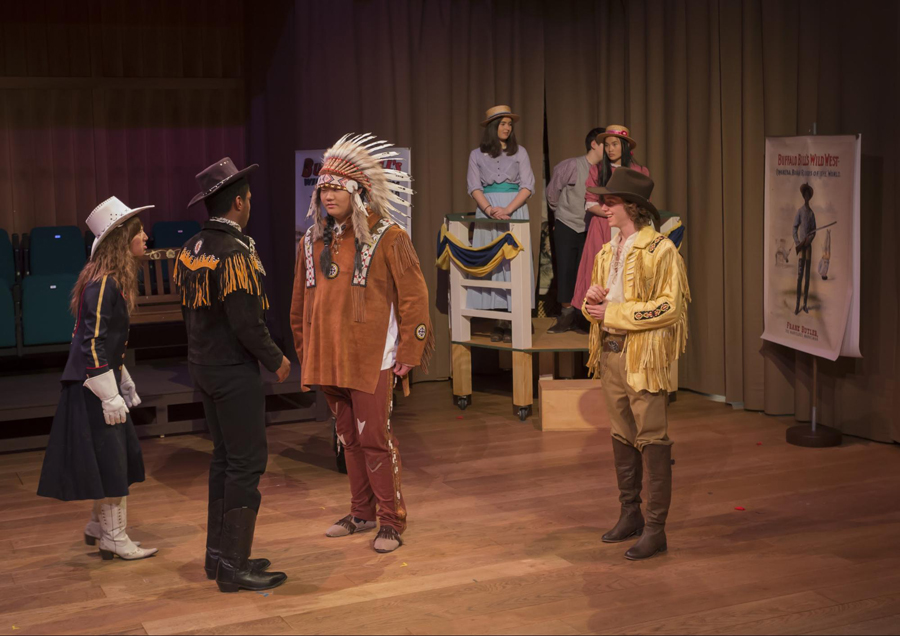 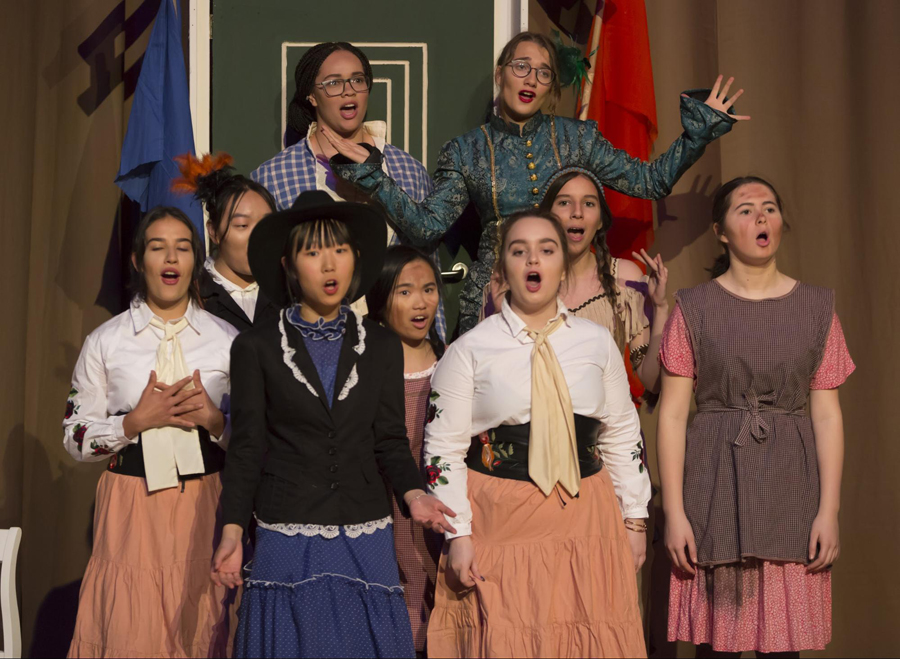 Cast (in order of speaking appearance) 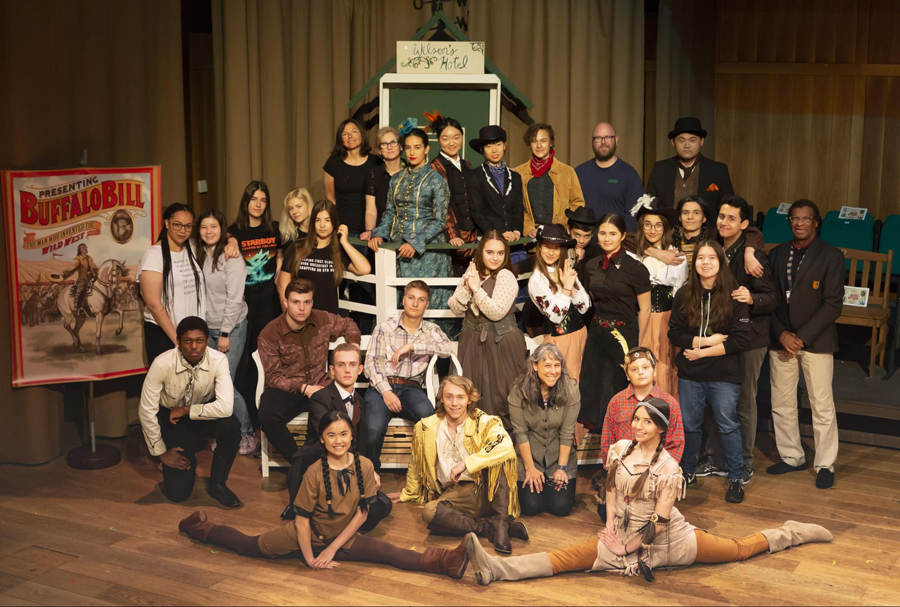 * Note that the Wednesday show was performed for the Middle School. 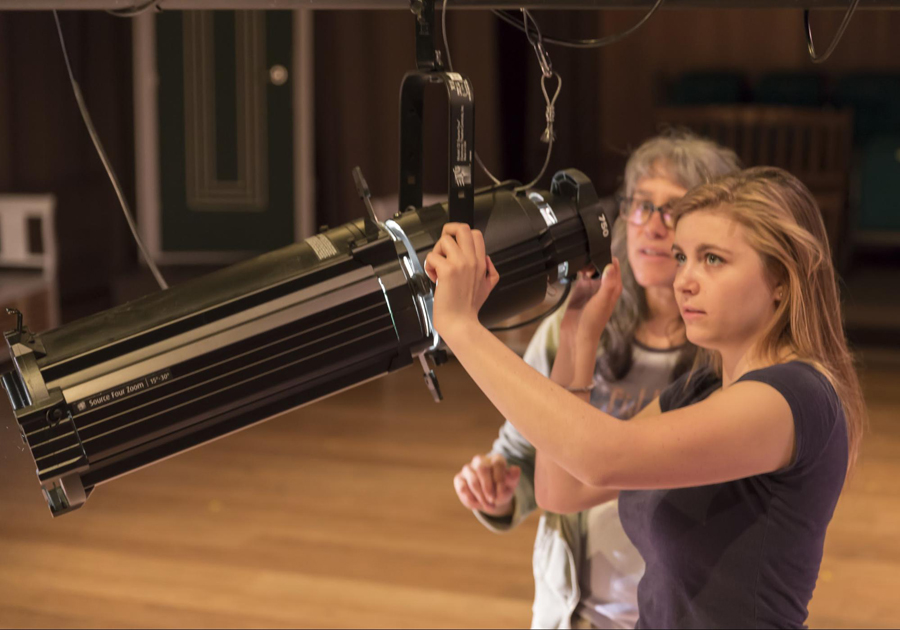