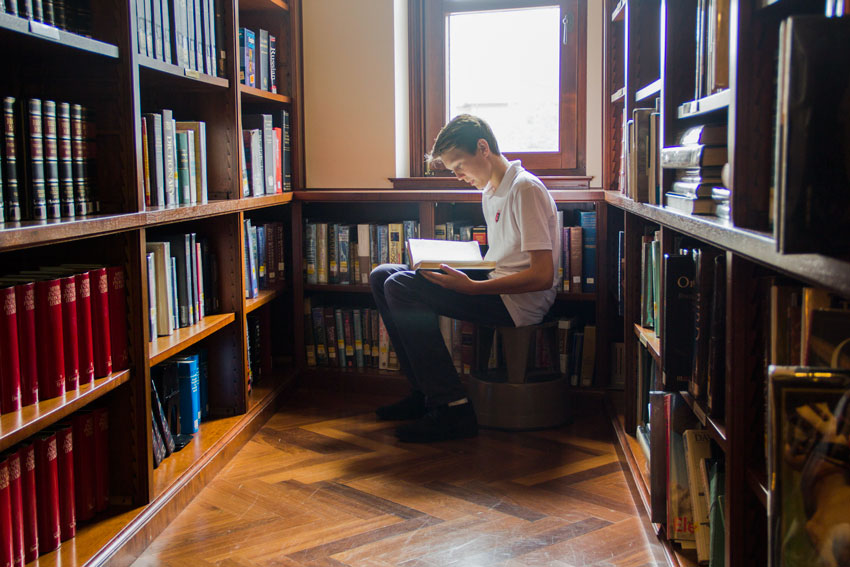 TASIS The American School in Switzerland offers its High School students the International Baccalaureate (IB) and the Advanced Placement (AP) curricula, each of which is designed to offer college-level courses and the opportunity to earn college credit. This article provides an overview of each program, analyzes how TASIS students have performed relative to the rest of the world, and looks at the School’s resulting track record with college admissions.

International Baccalaureate programs provide a demanding common curriculum for students in schools around the world. Founded in Switzerland in 1968, the IB aspires to outperform other curricula by developing highly-motivated students who are inquisitive, cosmopolitan, and thoughtful.

Although it is possible to take individual IB courses and exams and gain college credit (though unlike with the AP, students cannot take an IB exam without being enrolled in the corresponding course), the gold standard is to pursue an International Baccalaureate Diploma. The curriculum for the International Baccalaureate Diploma Program (IBDP) comprises six subject groups–studies in Language and Literature, Language Acquisition, Individuals and Societies, Sciences, Mathematics, and the Arts–and three core elements: Theory of Knowledge (TOK), in which students reflect on the nature of knowledge and on how we know what we claim to know; the Extended Essay (EE), an independent, self-directed research paper of 4,000 words; and Creativity, Activity, and Service (CAS), which requires students to complete a project related to those three concepts.

In the IBDP, students receive grades ranging from 1-7 (seven highest) for each of the six subjects. The final Diploma score is determined by combining the grades of these subjects and then adding up to three additional points for the TOK and EE components. Students receive a final score of 1-45, and the Diploma is awarded to those who gain at least 24 points while also meeting certain other criteria, including a satisfactory level of performance for the TOK, EE, and CAS components.

IB candidates take at least three (but not more than four) subjects at Higher Level and some at Standard Level. These courses differ in scope but are measured according to the same grade descriptors, with students expected to demonstrate a greater body of knowledge, understanding, and skills at higher level. Students who take individual IB courses instead of pursuing the Diploma should keep in mind that some universities grant credit for Higher Level courses but not for Standard Level ones. Most American universities will offer credit for Higher Level scores of five and above. Click here for details about how the IB is recognized by different universities around the world.

The IBDP is particularly appealing to students seeking a comprehensive and challenging curriculum with a heavy emphasis on writing. Earning an International Baccalaureate Diploma remains a relatively rare feat, with only 53,552 awarded in 2014 and just over a million held worldwide.

The Advanced Placement program was created by the College Board, a non-profit organization in New York City, in 1955. Its aim is to offer college-level curricula and examinations to high school students. Exams are scored on a 1-5 scale (five highest), and most American universities grant course credit to students who score high enough on a particular exam. For example, a student who earns a four on the AP English Literature exam and a five on the AP Biology exam will likely only need to obtain 30 credits at a university that requires 32 for graduation. The College Board maintains an AP Credit Policy Search for students wishing to learn what scores are required for credit at a given university. Note that universities in more than 60 countries now recognize AP in the admission process.

The Advanced Placement program is not a comprehensive curriculum but rather a collection of 37 individual courses and exams. Students are free to take as few or as many AP courses as their schedule allows. Those who struggle with Math and Science, for example, may choose to take standard-level courses in those areas while still challenging themselves with courses such as AP Art History, AP French, and AP Government and Politics. Students are also permitted to take AP exams without being enrolled in a class, a benefit for those who are proficient in a language not offered at their school or for those who want to self-study for a niche subject they’re passionate about. (TASIS students are advised to seek approval from the Academic Dean before doing so, as AP exams are extremely demanding, and it is not in a student’s interest to take an exam that he or she is unprepared for.)

Students who place a premium on flexibility or are intensely committed to a few academic areas may be more attracted to the AP than the IB. Roughly two million students combined to take a total of 4.5 million AP exams worldwide in 2014, with more than 30 percent of public high school students in the United States taking at least one.

Which is more appealing to universities?

Performing well in IB or AP courses, both of which signify an ability to do college-level work, will look very good on a student’s applications. The most selective universities want to see that a student has taken the most challenging course load offered at his or her high school. At most American schools, this would typically consist of a schedule filled with AP courses. But for a school like TASIS that offers both programs, students who are seeking admission to the most selective schools can be well-served by pursuing the International Baccalaureate Diploma, as it signals to universities that they have chosen to challenge themselves in all subject areas. Students can also do quite well for themselves in the admissions process if they excel on a number of AP exams in a broad range of subjects. Scores of four or higher in five or more AP exams will send a strong signal to admissions officers that a student has outstanding academic potential.

Greg Birk, Director of University and College Counseling at TASIS, routinely asks college admissions officers what they consider to be the highest-level, most rigorous curriculum path offered at TASIS. “More and more, they are saying that they put the IBDP at the top,” he said. “This has become increasingly true with American schools.” Birk notes that their answers run contrary to the longstanding myth that the IB Diploma should be pursued by students hoping to study in Europe while those wishing to attend an American university are better off sticking with AP courses. 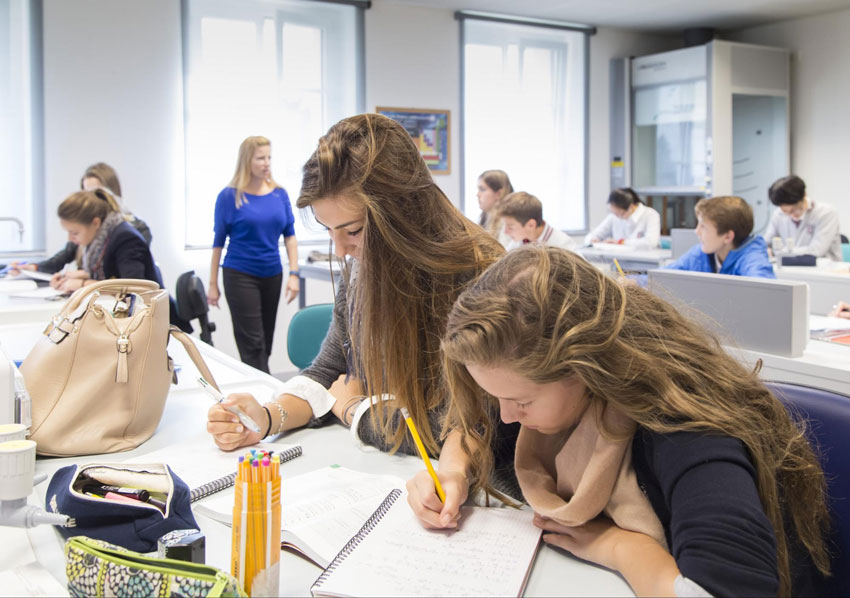 TASIS has offered the International Baccalaureate Diploma Program since 1996, providing students with an opportunity to achieve the full IB Diploma or take individual courses and exams. The School’s 46 Diploma candidates and 88 exam candidates in 2015 place the size of the IB program in the top quartile of the 2,795 schools that offer the IB worldwide. TASIS students have consistently outperformed their peers.

In 2015, 67 percent of TASIS 12th graders took one or more IB subjects and 47 percent were full-fledged Diploma candidates. (62 are expected for 2015-2016.) Including 11th graders, 88 TASIS students took a total of 440 IB subject exams, which are scored from 1-7. In total, 89 percent of the scores were four or above, 63.3 percent were five or above, and 38.2 percent were either a six or seven. The overall average score for TASIS students was 4.98 while the worldwide average hovers around 4.65 each year.

While TASIS students have posted their share of elite scores on the IBDP, they have enjoyed an even greater advantage over their peers when it comes to pass rates. As stated above, candidates must score at least 24 points and meet additional requirements in order to pass the IBDP. TASIS students have done so at a rate of 97 percent or higher for each of the past three years while the pass rate worldwide has remained below 80 percent.

Perhaps most impressively, the percentage of TASIS candidates who earn an International Baccalaureate Bilingual Diploma, meaning their first language (Language A) is not English or their Extended Essay is not written in English, has topped 60 percent six times since 2009. The worldwide rate has stayed between 28-31 percent over the same period.

In 2014, TASIS students took exactly 100 exams and recorded 27 fours and 23 fives. In 2015, several factors led to a significant increase in the number of exams taken. Of the 162 exams taken in 21 different subjects last spring, 62 percent of the scores were at least a three, 37 percent were at least a four, and 20 percent were a five. TASIS students performed exceptionally well in Calculus AB, Calculus BC, European History, French Language and Culture, Italian Language and Culture, and Studio Art: 2-D Design, averaging between 4-5 on each exam.

The six AP Scholars with Distinction from TASIS matches the combined total from 2011-2014, and the 13 awards overall mark the highest total in the last five years. (College Board AP data prior to 2011 is no longer available online.)

New TASIS Academic Dean Dr. Mark Abisi is pleased with these results but acknowledges that there is room for improvement schoolwide. “We’re thrilled to see so many students honored for their achievements on the AP exams,” he said. “But we also recognize that some of the scores were not as good as they should have been. We are working hard to address the factors that led to this. First and foremost, we need to make sure that all students are placed in classes they are adequately prepared for. Students who wish to take AP courses must demonstrate that they have the academic background and the drive to meet the significant challenge that these courses present, especially when they want to take several at the same time. AP courses should never be viewed as easier alternatives to IB ones. They are incredibly demanding in their own right.”

Earning strong grades in a challenging high school curriculum remains the single most important thing a student can do to maximize his or her chances of succeeding in today’s ultra-competitive world of elite college admissions. But grades and strength of course load are not the only factors, as universities will also look closely at SAT/ACT scores, extracurricular activities, leadership roles, application essays, letters of reference, work experience, and community service records, among other considerations.

Students who excel in several of these areas while earning a standard US-accredited High School Diploma from TASIS–with or without AP courses–can still expect to gain admission to quality universities, particularly in the United States. It is, however, important to note that a TASIS High School Diploma on its own is not sufficient to gain admission to degree-level courses at most public universities in Europe (excluding American-style universities). Students who have this diploma must also post strong scores on several Advanced Placement exams to qualify for admission at these universities.

The TASIS University and College Counseling Office, which helps all High School students develop an academic plan that aligns with their post-secondary goals, notes that students seeking to derive the maximum advantage from the IB and AP programs at TASIS are advised to come to the School as early as possible. While IB and AP courses typically begin in grade 11, TASIS offers pre-IB courses for 9th and 10th graders and occasionally allows students to take IB or AP classes in 10th grade. Ambitious students looking to gain an edge may also want to consider the TASIS Summer Program’s new International Baccalaureate Preparation course, which helps prepare rising 10th and 11th graders for demanding college preparatory curriculums.