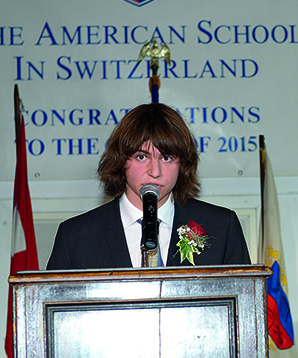 Class of 2015 Valedictorian Anton Alyakin (Russia) is now working on a double major in Computer Engineering and Neuroscience at Johns Hopkins University, where he has made the Dean’s List each semester and worked as a summer researcher in the Neuroengineering Lab.

Anton took a combination of AP and IB classes and exams while at TASIS, earning a perfect 5 on AP Calculus AB, AP Calculus BC, AP Statistics, AP Photography, and AP Physics and an excellent 6 on IB Math HL, IB Chemistry HL, and IB Biology HL. He was honored at graduation with the Shah Akbar Khan Award for Excellence in Mathematics.

Anton credits all his teachers for pushing him to be his best, but he singled out two in particular who had a profound effect on his academic career.

“The first teacher is Mr. [Peter] Locke, with whom I took IB Language and Literature,” said Anton. “I absolutely hate humanities, languages, and anything associated with them. I just feel that the array of skills I possess is not enough to excel at them unless I put a significant effort into it. Yet Mr. Locke’s class was one of the highlights of my last two years. It was the class I always had a pleasure to go to, a class I've learned more than in most, and a class in which I was never close to falling asleep in. (Trust me, this is quite an achievement considering how little sleep I usually got during the night.) Moreover, he was a teacher I'd go to in case of emergency because I knew that he cared about his students and would listen to them whenever they needed it.”

“The second teacher is Mr. [Dan] Schwartz, who taught two math courses in my senior year (IB Math and AP Stats),” Anton continued. “I found him to be a teacher who was one of the most passionate for his subject and the most caring about his students’ success as long as he knew that they cared themselves. His explanations were the definition of teaching ‘not by the book,’ and yet he managed to have one of the clearest and simplest ways of explaining mathematics and statistics concepts. I would go to his classes even when I was sick and had official permission to miss them. I learned a lot in them, and I've used a lot of what I've learned during my time in college.”

Anton, who played for the Varsity Soccer, Badminton, and Lacrosse teams and was a member of the Yearbook Club, made the most of his time at TASIS and amassed a countless number of indelible memories.

“I miss my two closest friends the most,” he said. “I miss my Certanago floor, which was in my opinion the most chaotic place on campus, where anything could and did happen. Staying up all night with your neighbor writing Internal Assessments and listening to rap music? Check. Discovering new recipes by mixing Japanese noodles, Russian Tushonka meat, and Italian spices? Check. Fight with a person for ten minutes so loud the whole floor could hear just to come to his room two minutes later asking for a tea bag? Check. Check, check, check. That floor was an unbelievable mix of personalities, which produced an unbelievable amount of stories I can remember, and I miss each and every one of my floormates. I miss my teachers and the rest of the Faculty. I just miss that community—that body of people that surrounded me for the time I was at TASIS. Many of us have ended up in a different city, country, or continent, but I feel that this doesn't even matter because right now we are scattered around the globe unified by the single fact that we were there, at TASIS, at the same time of our lives.”